50%
Tweet
Fed IT chief Steven VanRoekel urges leaders to abandon big-project thinking and spur a culture of innovation in the face of flat IT budgets.

The US government's top IT official has made few public appearances in recent months, a fact he attributed to temporarily serving in "three Senate-confirmed jobs at once" as fed CIO, administrator of the Office of E-Government and Information Technology, and acting deputy director for management at the Office of Management and Budget.

In his first public appearance since returning full-time to his CIO duties, VanRoekel said he has "spent a lot of time over the last few months" helping the administration formulate its fiscal year 2015 budget. But he declined to elaborate on what the president plans to present to Congress, or on his office's plans, except to say "the prevailing theme throughout the budget is tech and innovation -- it's part of everything we do -- and to drive its impact [on a large] scale."

VanRoekel hinted that the fiscal 2015 federal IT budget will remain in line with recent budgets, at about $82 billion, according to the last available figure for FY 2014. Too many federal officials think that to do more you have to spend more, but the opposite can be true, he said, noting that federal budget cutbacks have demonstrated that constraints can lead to more creative approaches.

"We have a modest tech budget compared to the [total] federal budget, but we are moving a sector of the economy through our actions, and... moving the world," VanRoekel said, referring to the administration's efforts to get agencies to adopt cloud computing, embrace open data standards, and improve IT security. 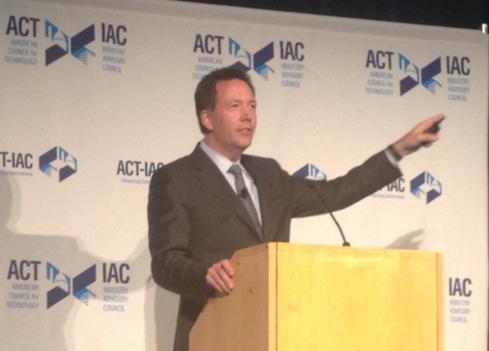 VanRoekel's remarks were part of a half-day event called "Igniting Innovation," sponsored by the Institute for Innovation, a unit of trade group ACT-IAC. The event showcased 30 innovative public service projects enabled by IT. Among the organizations and projects that received awards:

The Environmental Protection Agency for its How's My Waterway app, a map-based tool for citizens to determine the water conditions and pollution concerns for almost every body of water in the US. The EPA earned high marks for taking highly technical scientific data and translating it into a service that benefits local consumers.

The Department of Veterans Affairs and Agilex Technologies, which developed an iPad app that lets VA caregivers securely access and share the personal health information of veterans with VA care teams.

These types of innovations, VanRoekel suggested, are what happens when agencies and companies focus on delivering services from the customer's point of view.

VanRoekel spoke about the innovation lessons he says he learned while at Microsoft and the FCC. "It's all about culture," getting "all hands on deck," and being willing to break the entropy that prevents organizations from changing with the times, he said.

Too often in government, "big ideas lead to big RFPs, which lead to big vendors and to big contracts" -- and eventually to big failures. "It's unsustainable," said VanRoekel, who encouraged IT leaders to work with colleagues, customers, and vendors on more bite-sized projects.

VanRoekel also cautioned against allowing "sunk costs or sunk culture to define your forward path." He credited an FCC staffer for making the distinction between "red laws and blue laws" -- those laws that are required by statute versus rules that employees follow out of habit.

Leaders need to put walls around legacy investments if they're to begin moving forward with new approaches, he said. At the same time, he added, IT departments must "nail the basics" -- manage a single email system rather than a dozen of them, for example -- and they must involve their employees to sustain changes.

Wyatt Kash is a former Editor of InformationWeek Government, and currently VP for Content Strategy at ScoopMedia. He has covered government IT and technology trends since 2004, as Editor-in-Chief of Government Computer News and Defense Systems (owned by The Washington Post ... View Full Bio
We welcome your comments on this topic on our social media channels, or [contact us directly] with questions about the site.
Comment  |
Email This  |
Print  |
RSS
More Insights
Webcasts
Maximizing Database Performance to Improve Customer Experience
Quantifying the Benefits of a DevOps Strategy
More Webcasts
White Papers
[Forrester Research] The State of Data Security & Privacy
2020 SANS Cyber Threat Intelligence
More White Papers
Reports
Online Threats -- and What Your Org Can Do About Them
Making the Financial Case for Outsourcing Endpoint Protection
More Reports

I can't figure out if this federal CIO is signaling a worthwhile break from bad patterns of the past or just letting us know not to expect big things.
Reply  |  Post Message  |  Messages List  |  Start a Board

VanRoekel is definitely advocating the former -- not that agencies shouldn't think big, just not continue to commission huge IT projects that take years to execute.  One of the root problems of government IT is that funding is allocated on a yearly basis. But when IT projects can take 3-5 years to build, they fall prey to disruptive changes in out-year funding, the rotation of political appointees and senior leaders who alter course, and an acquisition process that must meet so many requirements, the technology is outdated by the time it's built.  VanRoekel is advocating commissioing smaller, more agile and more iterative IT improvements, and a shift to services where agencies.
Reply  |  Post Message  |  Messages List  |  Start a Board

Good point.  I'll even note that the US Constitution allows non-military appropriations to last more than 2 years.  But there is still a need for some flexibility in spending because next years priorities may or may not be this year's.  That said, I'm wondering if it wouldn't be better for Congress to set caps and then let the Administration decide what cuts to make if less money is available than has been appropriated.

I think given the amount of bloat that government projects often take on that smaller initiatives might be more effective.

Look, government is not like the private sector. As a result, I think that it is important for the public sector to do things differently, especially since everything is done with taxpayer money.
Reply  |  Post Message  |  Messages List  |  Start a Board

Not every project qualifies  When the Navy needed to replace its Intranet (NMCI), it still needed to create a system that supports more than 800K users around the globe (far from shore) and capable of handling all kinds of data stream and apps.  And many govt data bases, ie. at Social Security and the IRS, hold 100s of millions of records.
Reply  |  Post Message  |  Messages List  |  Start a Board

"Sunk cost" thinking every bit as common in the private sector, too. With $100 million into a legacy system, it takes a lot of guts for anyone to say "put a fence around it and let's do another direction for new functionality." Good for Van Roekel for giving people some air cover to make that call.
Reply  |  Post Message  |  Messages List  |  Start a Board

Chris, I'm sure you're right about the challenge in the private sector writing off sunk costs.  At least in the private sector, it's easier to take tax write offs, and reallocate the funds.  At agencies, doing the right thing (to shut down a legacy system) is complicated by the threat that annual funding will suddenly disappear; and it can take a long time to get new funding for replacement systems.
Reply  |  Post Message  |  Messages List  |  Start a Board

Success is hard if one never allows oneself to fail, but it would be better to experiment with small projects and then move to the big time if the concept has promise.  All employees in creative occupations (and I think that includes the computer professions) need some time to play, but they also have work they need to get done in a timely manner, and it's foolish to take big risks when small ones will work nearly as well.