Recurring budget questions and Congressional showdowns are driving away mid-rank IT talent, leaving an older workforce just when new talent is needed most.

Federal agencies are headed toward a cruel dilemma. Just as new technologies promise a once-in-a-generation opportunity to recast U.S. government operations and slash costs, thinning ranks of mid-tier IT workers and a graying federal IT workforce suggest that agencies won't have the right mix of staffing and skills to take advantage of those technologies.

It's not that the federal government hasn't been hiring people. The number of permanent federal IT employees is up 20% since 2008, in part to support growing cybersecurity demands in federal agencies. Despite a series of federal budget cuts including the sequestration this year, the number of permanent federal IT employees has increased steadily every year since 2008, from 67,300 to nearly 81,000 as of September 2012, and the growth only leveled off in the first quarter of 2013, according to figures from the Office of Personnel Management (OPM).

And the federal government is offering competitive wages. Government IT staffers today are better paid than many in IT, contrary to popular wisdom, ranking 10th among 30 U.S. industries, according to InformationWeek's 2013 Salary Survey. While government IT managers don't fare as well because they aren't eligible for the same kinds of bonuses as their private-sector peers, they still rank in the middle (16th) in terms of total compensation out of 30 industries surveyed.

But three years of salary freezes and broadening uncertainty about the future funding of many government programs have taken their toll on federal employees. That uncertainty grows more entrenched each year as Congress lunges from one stop-gap funding measure to another -- and as lawmakers once again threaten to leave 2.1 million federal employees on the brink of a government shutdown Oct. 1.

[ Is it going to get even worse? See Sequestration II: Expect Budget Rollercoaster In 2014. ]

Those and other factors have spurred the largest wave of retirements across the federal government in nearly two decades, with about 80,000 federal employees -- about 5% of the workforce -- expected to retire this year, according to OPM. It also is prompting many mid-level federal IT specialists, in particular, to look elsewhere for work.

Of greater concern to many government IT experts, however, is the resulting makeup of the federal IT workforce. Agencies are being left with a disproportionate number of older IT workers who know how to run legacy systems, and a shortage of younger workers who've grown up in the age of Web-based and mobile computing and who represent the next generation of federal IT leaders. 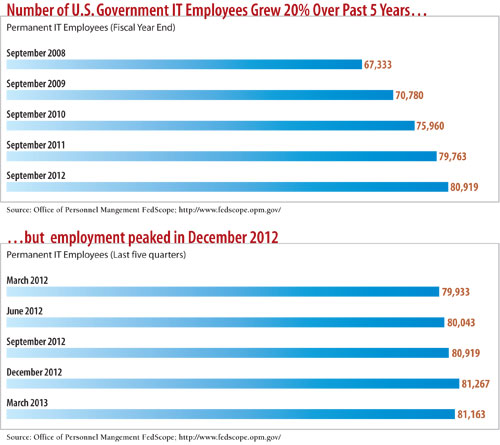 Put into starker relief: There are now nearly 11 times more federal IT workers aged 50 or above than there are IT employees under the age of 30 -- up from nine times more just two years earlier.

"We're seeing the retirement wave pick up at a measurable pace. And we know the 40-to-50-year-old cohort is the lowest it's been in 10 years," said Stan Soloway, president and chief executive of the Professional Services Council, which represents the contracting community. "So you're having a diminished workforce -- and (an emptying) bathtub in the middle ranks," said Soloway. "It's not pretty."

The article in no way encourages government employers to discriminate based on age. It reports the facts: that the government agency employee base is getting older and agencies need to do something about it before retirements leave them short on people and critical skills. Any good public or private sector enterprise needs to be aware of such workforce trends.
Reply  |  Post Message  |  Messages List  |  Start a Board

Thanks for commenting. If anything, I think what the data is saying is that government values and rewards those over 50 (and 60!) -- and probably more so than private industry does, although I didn't research that.

I completely agree, age is not an indicator of skill, nor necessarily a proxy for experience. What the data is suggesting is that the government is becoming a less friendly/appealing place for mid-career IT folks, whatever their skill; and that that has implications for potential shortages of essential talent and future leadership candidates that mustn't be overlooked.
Reply  |  Post Message  |  Messages List  |  Start a Board

Lots of food for thought here. "What began as a contracting method designed to
drive down government's costs has in many cases led to government IT
projects being performed by companies frequently derided as "bottom
fishers," with the talent and results to match, said Soloway."

We have seen what bottom prices buy you in the private IT sector from service providers -- and it is not pretty. Given the complex security issues at play now, this situation is especially troubling. Bottom-tier IT contractor body shops serve one purpose and it is not quality. It is cost.

Regarding the disappearing bench talent, private sector CIOs struggle to retain the upper-middle ranks too. Are government IT leaders being rewarded for talent retention? Probably not.