50%
Tweet
A survey conducted by Lockheed Martin and the Government Business Council finds reasons to be hopeful about federal IT and challenges that need to be addressed.

During Tuesday's House Judiciary Committee hearing on the challenge of balancing privacy with public safety, FBI Director James Comey faced skepticism about whether the agency had really fully explored how it might access an encrypted iPhone, currently the focus of a legal battle between the US government and Apple.

Though Comey insisted the FBI had sought assistance from other government agencies with cybersecurity expertise, not everyone was convinced.

Worcester Polytechnic Institute professor Susan Landau, in prepared remarks, said that law enforcement agencies should modernize their investigatory capabilities rather than relying on the assistance of the courts.

"FBI investment and capacity in this area is not at the scale and level necessary to be as effective as it needs to be," said Landau.

That's an issue across the entire US government. Government IT isn't what it could be.

But it's getting better. The Obama administration launched its Digital Government Strategy in 2012 and some progress is being made. Lockheed Martin and the Government Business Council last fall collaborated to survey federal employees at 29 agencies and identified both signs of progress and a need for further diligence.

The survey, "Paving the Way Toward Mission-Aligned IT," found that 72% of nearly 400 respondents said they were completely, very, or moderately satisfied with IT at their agency. At the same time, respondents said they wanted to see improvements such as apps and portals that offer better customer experience, better records management, more efficient internal communication tools, and field access to real-time data.

The federal employees surveyed made it clear that they believe federal IT services should be device-agnostic, compatible across platforms, and able to provide the metrics necessary to improve agency processes. At the same time, their satisfaction with their agency's current capabilities shows a gap between what should be and what is. 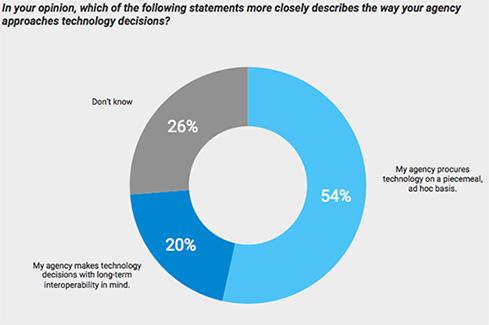 Respondents lay some of the blame at the feet of third-party contractors. One in three of those surveyed said IT contractors failed to understand their organization's mission. But there was also some introspection. Some 60% said their agency struggles to identify new IT innovations.

In a phone interview, Scott Gray, VP of IT and security solutions for Lockheed Martin's information systems and global solutions, said the report gives voice not only to the challenges and concerns among federal agencies, but also the progress that's being made. Lockheed Martin says it's the largest IT service provider for the US government.

"If we look across the federal space, naturally the maturity level of IT systems varies widely across the various agencies," said Gray. "And this is largely due to operational [issues], but budgetary constraints as well."

One difference between the commercial and federal sectors, said Gray, is that federal CIOs have to ensure that all the services their agencies provide, for internal and external stakeholders, continue to be delivered. Yet the need for stabilty can co-exist with innovation.

"What we've been seeing over the past couple of years is a growing acceptance of a greater risk profile, a willingness to take on greater risk to achieve improved outcomes," said Gray. "You can look at the acceptance of cloud and managed services, Agile and DevOps, as emerging ways to drive progress."

Gray also pointed to growth in the adoption of "as-a-service" business models. "Those are good indications that commercial best practices are starting to find their way very solidly into the federal sector and citizens are starting to reap the benefits," he said.

Commercial best practices have become easier for government agencies to adopt as a result of public-private partnerships, particularly those that involve cloud computing.

"Six or seven years ago, the demand and, dare I say, the skepticism around cloud was completely different than what we're seeing today," said Gray. "When I'm talking with CIOs and other executives, it's very clear they've made the transition, not necessarily to looking at cloud as a destination but as another very robust set of tools to achieve outcomes."

That means reduced cost of ownership, said Gray, and greater focus on the agency's mission. "The public-private partnerships that are evolving are absolutely critical to making that a value-add equation," he said, noting that there's more formalized outreach to the private sector and a greater flow of commercial IT talent into government.

With the proliferation of mobile devices, Gray says a lot of agencies are investing in open-source standards and platforms, for the sake of interoperability and, ultimately, more cost-effective operation.

"If you do that correctly -- and this is where I think industry and government can come together very strongly to drive solutions -- it actually drives down the cost substantially over the long haul," said Gray.

Gray credits the growing adoption of Agile methodologies, which involve working with customers, rather than delivering a product developed without input, for improved IT services and applications. "More and more we're seeing agencies adopt that kind of approach to delivering solutions," he said. "We talk about mission-aligned IT. It's very, very difficult to get to that end state, the user experience we're striving for, if the user is not involved from day one."

There are two primary constraints on the IT aspirations of federal agencies, said Gray. One limitation is budget. There's never enough money to fulfill everyone's wish list. The other he characterizes as organizational inertia. "Quite often, the conversations that we have with our federal partners go down the lines of change management," he said. "How can they get a large enterprise organization aligned to a different way of doing business?"

As a result, said Gray, today's CIO is very different than the CIO of 10 or 15 years ago. At least among federal agencies, organizational behavior must change to accommodate new technology. And that requires leadership.

"Today's CIO has to perhaps be the best coalition builder of anyone within the organization," said Gray.

Thomas Claburn has been writing about business and technology since 1996, for publications such as New Architect, PC Computing, InformationWeek, Salon, Wired, and Ziff Davis Smart Business. Before that, he worked in film and television, having earned a not particularly useful ... View Full Bio
We welcome your comments on this topic on our social media channels, or [contact us directly] with questions about the site.
Comment  |
Email This  |
Print  |
RSS
More Insights
Webcasts
Building and Refining Threat Hunting Practices in Your Enterprise
Securing Active Directory the Way it Deserves
More Webcasts
White Papers
Container Security Best Practices: A How-To Guide
CyberSecurity Trends 2020
More White Papers
Reports
The Threat from the Internet--and What Your Organization Can Do About It
DNS Network Traffic Volumes During the 2020 Pandemic
More Reports

More Informa Tech Live Events
DevOps: Innovating with Speed, Security, and QualityNow That Ransomware Has Gone Nuclear, How Can You Avoid Becoming the Next Victim?Why Performance Testing is More Critical Today