For those serving in the military, having situational awareness -- or knowing what's happening all around -- is crucial. Staring at a laptop screen is not an ideal scenario for a warfighter, so the Air Force is turning to Google Glass as a possible solution to the challenge.

Since the roles of pararescue jumpers vary depending on the mission -- whether it's search and rescue or triage -- they require dynamic interfaces and hardware to adapt to the fluidity of mission objectives, according to the Air Force. The BATMAN research team is developing a medical app that can be used with Google Glass and a smartphone to monitor vitals of casualties during rescue missions. The app would provide all the vitals through remote sensors, allowing PJs to assess which patients are most critical and need immediate assistance, said Andres Calvo, a software developer and civilian contractor at the Air Force Research Laboratory's 711 Human Performance Wing.

The Air Force is testing Google Glass with tablets and smartphones as a complementary technology, not as a replacement.

In addition to developers, the BATMAN team includes behavioral scientists and psychologists who are researching how various interfaces -- such as laptops, tablets, smartphones, and wearables -- affect a warfighter's awareness. "The result isn't an app but a better understanding of how, for example, you can interact with Google Glass in your environment," Calvo explained. 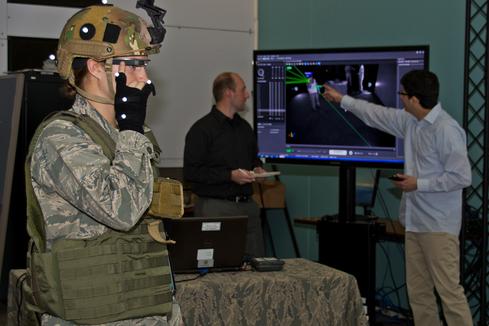 Google Glass isn't the only technology with heads-up display on the Defense Department's (DOD) radar. "Across the DOD we have a need to provide high situational awareness for warfighters. The goal here is to find the best heads-up display of information portrayal so the warfighter can be more effective in his various roles, whether or not they be in combat or a humanitarian mission," said Dr. Gregory Burnett, chief engineer for the BATMAN program.

The Air Force received the wearable technology through the Google Glass Explorer Program, which requires interested parties to submit an application for approval and a payment of $1,500. Earlier this month, Google extended the Explorer Program to businesses. Glass At Work is an initiative created to promote the computerized eyewear in the workplace. And on April 15, Google will open up the program to adults based in the US. The company said it has a limited number of spots available to consumers interested in trying out the technology.

Elena Malykhina began her career at The Wall Street Journal, and her writing has appeared in various news media outlets, including Scientific American, Newsday, and the Associated Press. For several years, she was the online editor at Brandweek and later Adweek, where she ... View Full Bio
We welcome your comments on this topic on our social media channels, or [contact us directly] with questions about the site.
Comment  |
Email This  |
Print  |
RSS
More Insights
Webcasts
Making XDR Work in Your Enterprise - May 12
Multi-Cloud Data Management for Modern Applications
More Webcasts
White Papers
Enabling Enterprise Resiliency Through Cyberthreat Detection
Tech Insights: SASE's Pandemic Boost Likely to Stick
More White Papers
Reports
Intelligent Outcomes Are Key to Business Resilience
2021 Application Security Statistics Report Vol.1
More Reports

I suspect the most effective way to put Glass on the road will be routing mobile app data and car systems data to a HUD on the car window. Wearing a device isn't necessary unless you have to overlay something on the wearer's view regardless of view direction.
Reply  |  Post Message  |  Messages List  |  Start a Board

...Glass in its current form would contribute more to situational distraction than situational awareness. Navigating through Glass cards isn't something I see working while falling from the sky. And the speech recognition probably wouldn't function adequately well while plummetting and being buffered by the wind. But in some modified form I could see a visual display being useful.
Reply  |  Post Message  |  Messages List  |  Start a Board
InformationWeek Is Getting an Upgrade!