Plenty of women hold leadership positions in higher education technology departments. So why is the percentage of females in the CIO seat declining?

8 MOOCs Transforming Education
(click image for larger view and for slideshow)
Over the course of my research at the Center for Higher Education CIO Studies, the percentage of women chief information officers (CIOs) in higher ed has been on a slow but steady decline. In the past, information from research on CIOs and tech leaders (TL) indicated that trend would continue. Tech leaders are people who serve in the next organizational layer down from the CIO.

One reason might be a finding from the TL research that showed a consistently smaller percentage of female TLs who are interested in becoming CIOs than their male counterparts. In addition, female CIOs were retiring faster than male CIOs. Another reason could be the widely reported gender disparity in degree-major technology disciplines. And it could be the fact that female TLs and CIOs were retiring sooner than the male TLs and CIOs.

Despite this list of bad news for gender parity in the higher education CIO ranks, there might be positive change on the horizon.

[ In the battle for tech talent, small colleges and universities have a lot to offer. Learn Why Young IT Pros Should Consider Higher Ed. ] 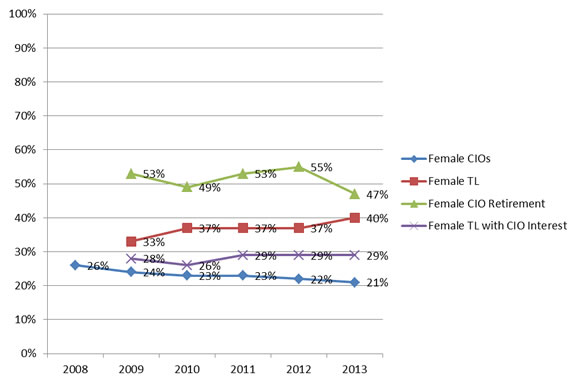 I took a deeper dive into the data in an attempt to determine if there were differences between the male and female TLs that are driving down the percentage of CIOs who are women. The CIOs and TLs in this research indicated that the two best ways to prepare for a CIO position were: using a mentor and on-the-job training (OJT). 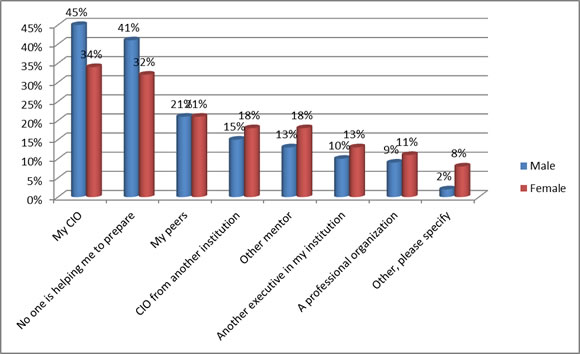 One number that puzzles me is the "CIO interest" figure holding steady, even as the number of tech leaders rises. Is the CIO role in higher ed changing in such a way that it is becoming less appealing to women? Is this a matter of timing? I.E., some women (and men) delay their final charge to become CIO to coincide with family demands. But then they do make that charge. Perhaps some of both. Let's hear from some female IT leaders in higher ed on this topic.