With support from the Kramden Institute and a $25,000 grant from MetLife Foundation, more than 250 employees from MetLife Global Technology and Operations participated in the Geek-A-Thon. The goal was to help students who don't have home computers and are at a disadvantage since teachers regularly assign digital homework, said Jim O'Donnell, CTO of MetLife Global Technology and Operations.

[Are you a Mac? Read Apple's Mac Surge: 4 Observations.]

"Programmers can hold holiday food drives like everyone else and we do. But equally important is nurturing young minds through education and technology, and more than ever, technology holds tremendous power to change people's lives," O'Donnell told InformationWeek. "Our partnership with the Kramden Institute is a chance for us to help families tool up."

Out of the 311 refurbished desktops, 80 were given to students in Raleigh, and the rest will be donated as needed by the Kramden Institute, which was founded in 2003 to provide technology tools and training to bridge the digital divide. Half of the student recipients were children of veterans and active service members in North Carolina.

The refurbished PCs were loaded with Ubermix, a Linux-based operating system designed by educators. The OS comes with 60 pre-installed applications and educational software, most of which don't require an Internet connection and can be used by students who don't have Internet access at home. 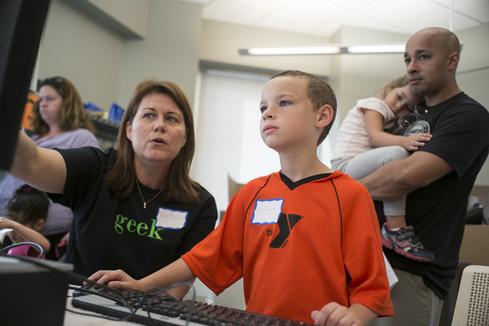 Applications that students received with their computers include Scratch Visual Programming, an entry-level computer programming software with a drag-and-drop user interface that lets students build games and animations. Another one is Tux4Kids, a math, typing, and design application, featuring a family of penguins, for younger students. There's also LibreOffice, a suite of word processing, spreadsheet, and presentation programs. Students can download additional free software through the Ubuntu Software Center.

Ubermix was selected over other operating systems because it "turns a donated computer into a powerful tool for learning," said O'Donnell. It also has a 20-second quick-recovery mechanism that allows students to recuperate from problems and restore the system to a default state.

Technologists were able to install Ubermix in five minutes, compared to more than two hours that it took to install an OS in the past. Converting to Ubermix meant it was possible to install 30 computers in the time it previously took to complete just one, according to MetLife.

O'Donnell said planning for a 2015 Geek-A-Thon event is already underway. MetLife will have even more room to refurbish computers at its new technology campus in Cary, N.C., opening in 2015. O'Donnell added: "We hope to break this year's record of 311, which is the greatest number of computers Kramden ever refurbished in two days with any organization."