What can NASA do with 3D printing? Take a look at these pioneering ideas for current and future missions. 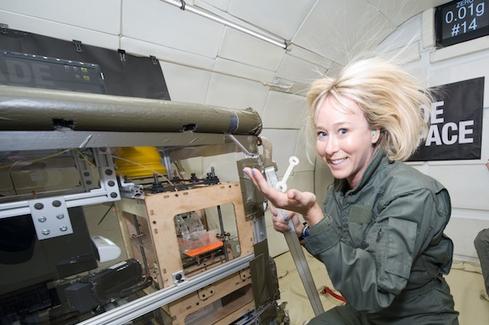 (Image: Made in Space)

What if there were a more efficient -- and less expensive -- way to develop tools and science instruments for space missions? NASA may have found the answer with 3D printing. The agency has introduced a number of programs focused on prototyping tools using this manufacturing technique.

"We're not driving the additive manufacturing train; industry is. But NASA has the ability to get on board to leverage it for our unique needs," Ted Swanson, the assistant chief for technology for the Mechanical Systems Division at NASA's Goddard Space Flight Center, said in a written statement. Swanson is the center's point of contact for 3D printing.

Goddard's Internal Research and Development (IRAD) has been evaluating the usefulness of 3D printing for the past two years. One area of interest is electronics -- or more specifically, the techniques for removing heat from heat-sensitive computer chips. Goddard, for example, used additive manufacturing to develop a system-on-a-chip for monitoring everything from voltages and currents to temperature levels.

Nearly all NASA centers have started using additive manufacturing for various applications, according to the agency.

The Langley Research Center in Virginia has come up with a "green" manufacturing process called the electron beam freeform (EBF3), which uses an electron-beam gun, a dual-wire feed, and computer controls to remotely manufacture metallic structures for building parts and tools. The Kennedy Space Center in Florida is researching the use of soil on extraterrestrial bodies as feedstock for building 3D habitats as well as other structures. And the Ames Research Center in California is exploring the possibility of using synthetic biology to manufacture biological materials.

In addition to different programs running at its centers, NASA has been working with Made in Space to launch equipment that will be used aboard the International Space Station, as shown in the picture above. In the near future, the agency sees astronauts using 3D printing in space to create parts and tools they need.

NASA is also taking part in a public-private partnership called America Makes, formerly known as the National Additive Manufacturing Innovation Institute (NAMII). NASA, along with four other government agencies -- the Departments of Defense, Energy, and Commerce, and the National Science Foundation -- have jointly invested in a pilot institute created to transition 3D printing into mainstream US manufacturing.

Check out our slideshow to see more of NASA's achievements in 3D printing.

Thanks for sharing that broadcast, Chris. 3D printing has a lot of potential in many different areas. Unfortunately, it got off to a mixed start since 3D guns grabbed the headlines. But I've read a lot about advances in healthcare and 3D -- things like printing an ear, a liver... all sorts of literally life-changing advances. Add in the business implications, and it's not an overstatement to say 3D printing is changing the world.
Reply  |  Post Message  |  Messages List  |  Start a Board

In this InformationWeek Radio broadcast, ConocoPhillips' CIO talks about his interest in 3D printing for the same reason as NASA -- the prospect of printing replacement parts at a hard-to-get-to-location. In his case it's a remote oil and gas rig, where they keep a lot of expensive spare parts on hand because it's difficult to deliver spare parts and extremely costly if rig isn't pumping.

Thanks for sharing the link about printing in zero gravity. It is an intriguing concept.

You'd think astronauts would be pretty game to try out some of these 3D foods, considering what they have to live on during the three, six, 12 months they're in space. Of course, the armed forces are also looking into this area for obvious reasons. A big development is the ability to print using different materials with one printer.
Reply  |  Post Message  |  Messages List  |  Start a Board

I love this question, because it never occurred to me. I found this article that described tests proving 3D printing can work without gravity, though it didn't explain how:

The materials question is both central to the discussion on 3D printing, and for now, a bit beside the point. This is obviously all in the experimental stage for NASA for now.  But you know 3D printing has come of age when NASA is piloting a variety of projects around it.

NASA is also working with Texas-based company Systems and Materials Research Consultancy to explore the possibility of using a 3D printer for making food in space. Naturally, the big concerns with that are safety, acceptability, variety, and nutritional value.
Reply  |  Post Message  |  Messages List  |  Start a Board

On a similar note, what happen when there's an equipment malfunction or something vital breaks in space? You print a replacement part.
Reply  |  Post Message  |  Messages List  |  Start a Board

Make your own tools on the spot. What would the Apollo astronauts make of 3D printing in space?
Reply  |  Post Message  |  Messages List  |  Start a Board

Maybe someday they'll include a 3D Printer on a Mars (or Titan or Io) rover, so it can manufacture its own tools as needed during exploration.

How else could this fit in?
Reply  |  Post Message  |  Messages List  |  Start a Board
InformationWeek Is Getting an Upgrade!