50%
Tweet
New manned spacecraft will use a flight computer adapted from jetliners for deep space missions to the asteroids and Mars.

You wouldn't expect NASA to power the brains of a manned spacecraft bound for the asteroids or Mars with a computer from Best Buy. Yet with the Orion spacecraft being prepared for a first unmanned test flight in December, the space agency has inched to something more like an off-the-shelf design -- by NASA standards, anyway.

Instead of being a completely custom computer, the flight mission computer in charge of the new space capsule is adapted from a computer avionics platform used aboard jetliners -- albeit with substantial accommodations for radiation hardening and redundancy. The onboard network will also be more standard, capable of working with any Ethernet-connected device but also of achieving real-time precision.

Looking much like an overgrown Apollo system, Orion is intended to return NASA to the business of manned space exploration, taking astronauts far beyond the altitude of the International Space Station or any height attained by the late, lamented Space Shuttle. Orion is what survived after the cancellation of the Constellation program in 2010, a more modular approach to developing the components needed for deep space exploration. Most likely, its first mission will be to an asteroid, although ideas for a Mars mission are also being kicked around. First, Orion must prove itself with an unmanned test flight scheduled for December, followed by a planned 2017 flight that is to integrate a new high-powered booster. The first manned flight is still several years away.

The main goal of December's Exploration Flight Test-1 will be to test the new heat shield and bring the space capsule home intact. However, the computer system and associated sensor and control electronics -- collectively known as the avionics package -- will also be getting a workout, since the plan is for the spacecraft to fly itself without human intervention.

"There are a couple of hundred commands we could send to the vehicle, but they are for all contingency or emergency operations," explained Matthew Lemke, Orion Avionics, Power and Wiring Manager at NASA, who works with Lockheed-Martin and its subcontractors on the flight control systems. If all goes as planned, however, mission planners still want to make sure to test their ability to send a remote command, he said. "So we're making up a dummy command, if you will, so we can send a command and the spacecraft will answer back, 'yes, you did.' But we expect it all to work smoothly."

"The spacecraft is capable of doing the mission itself," he added, "although of course once you add a crew, it becomes even more capable." 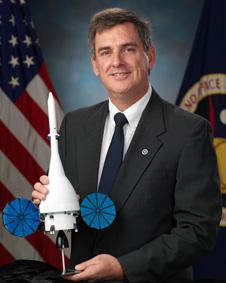 The avionics system has gone through extensive testing on the ground, but the test flight will show how all the components work together when integrated into a complete system and subjected to all the extremes of radiation and vibration that only a real space flight can provide, he said.

Orion will be the first reusable manned spacecraft that parachutes back to Earth for a water landing, a model that hasn't been used by the U.S. space program since Apollo. In part, the Orion program is using a simpler design reminiscent of the spacecraft designs of the 1960s in an attempt to improve on the safety record of the shuttle program, which was marred by both the disintegration upon reentry of the Columbia in 2003, as well as the Challenger explosion of 1986.

Instead of building a new space truck to replace the shuttle on missions to Earth orbit, NASA is hoping that private firms like SpaceX and Orbital Sciences will graduate from carrying supplies to the ISS to delivering crews there. That would provide a welcome degree of independence for astronauts who in recent years have been dependent on hitching rides with the Russians. If private contractors can handle transport to low Earth orbit, that will free NASA to get more aggressive about going where no man (or woman) has gone before.

Like Apollo, the Orion crew capsule will be launched into space atop a stack of booster rockets, which will be discarded along the way. Also like Apollo, the crew module is joined to a service module that includes its primary engines and oxygen tanks for operations in space, but only the conical crew compartment returns to Earth. Unlike with Apollo, Gemini, and Mercury, the Orion space capsule is designed to survive a water landing without letting its major electronic systems be rendered useless by salt water corrosion.

We spoke with Lemke about how NASA's approach to the computing component of spaceflight is changing with this program.

InformationWeek: Is there anything particularly exotic about the Orion flight computer? What stands out most about this design?

Lemke: Our vehicle master computer is from Honeywell and it's based on the 787 avionics they did for Boeing. So one new thing for NASA is we're not designing the computer from the ground up just for space, which is how we did shuttle. That was very, very expensive. Using commercial technology really reduced the cost of our flight computer. Then all we have to do is live with some disadvantages. The big one we have is radiation tolerance. A commercial airliner doesn't care about radiation -- it doesn't see very much. But we go up through the Van Allen Belt, farther into deep space, encountering heavy doses of radiation potentially. So we've done things to upgrade the computer. We've replaced individual piece parts with radiation-hardened components. Then we look at redundancy on the vehicle and say, "what if we allow radiation to happen to certain components" and [the flight computer] goes down. Well, we need another computer just in case. That's still a lot cheaper than trying to design one that is never going to have a problem.

The General Accountability Office is questioning whether NASA's Space Launch System, the booster assembly that's supposed to be mated with Orion, will materialize on schedule for a planned 2017 trip to the Moon (preparatory for deeper space voyages). The December test flight I talk more about in this story uses an existing booster, sufficient to get the vehicle into space for an automated test flight and reentry (test of the new heat shield). If Orion is flashback to the Apollo capsule, SLS is the new Saturn V, so without that Orion won't be going very far. You can read the GAO report here.

It does strike me that the GAO is faulting the program for lack of long-term planning for what the SLS/Orion missions will be, which is kind of a Catch 22 for NASA. Grander, more detailed plans for deep space exploration tend to get shot down because the price tag runs too high. Orion and SLS are part of a more incremental approach to developing the capabilities for deep space travel. Once they prove they can shoot big payloads farther and faster into space than ever before, there will be more room to get serious about specific missions to the asteroids or Mars.

Instead of planning a grand expedition, they're starting with baby steps. If the GAO was a parent, it would be telling the baby, "It's great that you've learned to crawl and pull yourself up on the coach, but until you know where you're going to go in 20 years I'm not sure you should try to walk across the room."

Or maybe I'm just trying too hard to believe that NASA is going to get back into the business of flying manned spacecraft somewhere beyond low Earth orbit.
Reply  |  Post Message  |  Messages List  |  Start a Board

Interesting read. It is commendable how fast technology is changing to accomodate even space travels....
Reply  |  Post Message  |  Messages List  |  Start a Board

Interesting to see the agency stepping carefully away from custom-designed computing for flight systems. The time when the agency had to invent everything that flies aboard a spacecraft is past.
Reply  |  Post Message  |  Messages List  |  Start a Board
Editors' Choice
Hot Topics