Sometime in the 2030s, NASA wants to land astronauts on Mars. Here's a look at what it will take to get us there. 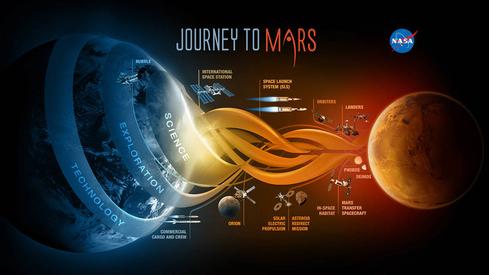 With film audiences traveling to Mars in their imaginations through The Martian, a fictional account of a future mission to fourth planet, NASA is preparing to make that trip.

On Thursday, the space agency published an outline of its plan to reach the red planet, "NASA's Journey to Mars: Pioneering Next Steps in Space Exploration."

NASA Administrator Charles Bolden said in a statement that he plans to discuss the plan with members of Congress and the space agency's international partners.

Reaching Mars may be the most ambitious challenge undertaken by humanity to date. The journey will tax bodies, minds, and resources on an unprecedented scale. It will require NASA to work with private sector and international partners, including the 12 other space agencies seeking to expand humanity's reach in the Solar System.

NASA acknowledges the way to Mars will not be easy, but it maintains its goal is realistic. "We are developing the capabilities necessary to get there, land there, and live there," NASA says in its report.

[Check out these stunning images of NASA's Apollo missions through the years.]

The plan anticipates three phases, each moving humans closer to Mars, with an arrival date sometime in the 2030s, if all goes well.

The first phase involves Earth Reliant exploration. It's where we are now, using the International Space Station for experiments to help us understand how to maintain human health in space and develop the necessary technology to travel and thrive in hostile environments.

Over the next decade, NASA will expand the scope of its operations to cislunar space, the area of space around the Moon. During this Proving Grounds phase, NASA and its partners will focus on validating the systems it develops for transportation, working in space, and keeping astronauts healthy far from home. Researchers will also focus on balancing the need for supplies from Earth against opportunities to use locally generated or recaptured resources, with a view toward making human outposts in space self-sustaining.

The final phase will be Earth Independent. Astronauts will reach for low-Mars orbit, perhaps the Martian moons, and finally Mars itself. The goal, says William Gerstenmaier, associate administrator for Human Exploration and Operations at NASA Headquarters, is "a future with a sustainable human presence in deep space."

NASA expects the journey to Mars will improve life on Earth. "NASA's human exploration, science, and technology endeavors are intertwined," the space agency's report concludes. "As our exploration activities reach farther into the solar system, we will also broaden our reach here on Earth, enabling more participation, partners, activity, and economic and technological benefits."

We have something to look forward to.