A new program from the Obama White House is looking to spend $160 million on so-called Smart Cities to improve communication and quality-of-life through technology and the Internet of Things.

The White House wants cities to be able to communicate better, so it has a plan. It involves some money, software development, and a little bit of emphasis on the buzzworthy Internet of Things trend.

On Monday, Sept. 14, the Obama administration announced what it's calling the Smart Cities Initiative, which means $160 million in federal grants to create software and IoT applications that can help collect data and information in order for communities to deliver better services to citizens.

Or, as the White House puts it, the "'Smart Cities Initiative' [...] will invest over $160 million in federal research and leverage more than 25 new technology collaborations to help local communities tackle key challenges such as reducing traffic congestion, fighting crime, fostering economic growth, managing the effects of a changing climate, and improving the delivery of city services." 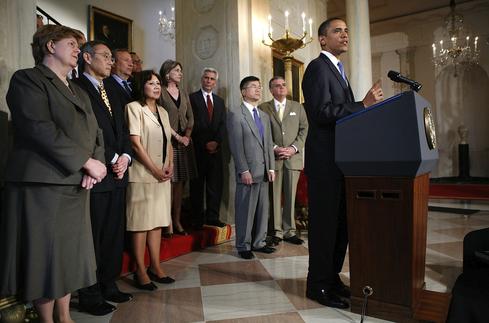 Well, that's what the feds said they were shooting for.

When you look into the specifics of all this, Mozilla.org ends up sharing an $11.5 million National Science Foundation (NSF) grant with US Ignite, a public-private collaboration that spans over 40 cities and communities across the nation.

The grants have the stated purpose "to develop and scale next-generation Internet application prototypes that leverage gigabit speeds to achieve transformative impact in areas ranging from health care to public safety."

I guess they want to get to fiber speed capability there right out of the box.

As the White House put it, "These investments include new awards to US Ignite, Inc., and the Mozilla Foundation to create 'Living Labs,' or communities of practice that facilitate the participation of citizens and community organizations, as well as idea and application sharing, across cities and regions."

An award to Kansas State University will fund research on novel approaches to integrate distributed power sources, such as rooftop solar panels and storage batteries, with the existing electric power grid.

Power to the people, right on.

There will also be $3 million for the University of Chicago to support the creation of the Array of Things (AoT) in Chicago.

AoT will be the first network to "serve as an infrastructure for researchers to rapidly deploy sensors, embedded systems, computing, and communications systems at scale in an urban environment. Comprised of 500 nodes deployed throughout the city of Chicago, each with power, Internet, and a base set of sensing and embedded information systems capabilities, the Array of Things will continuously measure the physical environment of urban areas at the city block scale and unlock promising new research trajectories."

It's IoT on growth enhancers, and a place to plug in all the data that the sensors the IoT will generate.

But, it's also being done in the city were Obama's ex-chief of staff, Rahm Emanuel, is now mayor. It's also the same city that decided this year that it wanted tax revenue from services like Netflix that are delivered over the Internet through the cloud.

Could such a city over-regulate IoT traffic, or perhaps decide that such traffic might be a fine future revenue stream?

There are other efforts going on.

AT&T is announcing that it will support IoT and smart cities technology adoption by supporting test beds in US cities, as well as others around the world. The focus will be on "smart metering, lighting, traffic management, parking, and public safety."

The company will even have a National Institute of Standards and Technology-approved Smart Cities hackathon focused on participating municipalities at its AT&T Developer Summit in January 2016.

This is how the feds see IoT, then: They want to get involved with it at the city level so they can implement fiber-level communication between cities. How all this communicating will specifically help the cities will be seen.

Anything that makes traffic lights in a city work better can't be all bad.

Larry Loeb has written for many of the last century's major "dead tree" computer magazines, having been, among other things, a consulting editor for BYTE magazine and senior editor for the launch of WebWeek. He has written a book on the Secure Electronic Transaction Internet ... View Full Bio
We welcome your comments on this topic on our social media channels, or [contact us directly] with questions about the site.
Comment  |
Email This  |
Print  |
RSS
More Insights
Webcasts
Bolstering Your Enterprise Cyber Risk Assessment
Disaster Recovery/Business Continuity in the New Normal
More Webcasts
White Papers
Guide to Enabling 5G Deployments
Top Serverless Security Risks and How to Mitigate
More White Papers
Reports
[Report] 2021 State of IT & SecOps
The Need for Speed: Second Generation EDR
More Reports

Yeah, I hope traffic lights will be smart enough to adapt to time of day and not just be big boxes of sequential realys.

But then again, I don't want them lights hacked either.
Reply  |  Post Message  |  Messages List  |  Start a Board

If done right, this effort can demonstrate big intra-city connectivity so that the best thing in the mix can shine.

IoT will need bandwidth. This stuff moves the bits down the wire.
Reply  |  Post Message  |  Messages List  |  Start a Board

Well, maybe they are doing things that they think can be done.

Overhauling federal IT is massive. So many stakeholders in there.
Reply  |  Post Message  |  Messages List  |  Start a Board
InformationWeek Is Getting an Upgrade!