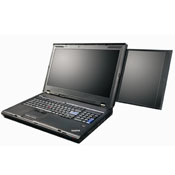 The convertible X201 tablet's multi-touch screen can be laid flat on a standard keyboard for use as a slate PC. The device is targeted at businesses and is available with up to 8 GB of system memory, and the choice of up to a 500-GB hard drive or a 250-GB solid-state drive. The system weighs between 3.57 and 3.95 pounds, depending on the battery. Buyers can choose between a Core i7 640LM or 620LM processor.

The X201 tablet is the kind favored by companies, because of its standard keyboard and other features that make it possible to operate business software. Lenovo in January introduced at the Consumer Electronics Show a hybrid laptop aimed at consumers. The IdeaPad U1 is either a clamshell notebook or a multi-touch slate tablet, each with its own processor and operating system. The two-in-one system is scheduled to be available in June at an estimated retail price of $999.

The ThinkPad W701 and W701ds workstations have 17-inch screens, with the latter also sporting a 10.6-inch display. Other than the dual-screen, the workstations are the same, with a choice of either a Core i7 920 or i7 820 QM quad-core processor. The systems are available with either Windows 7 or Windows XP, up to 16 GB of system memory, a HDD or SSD, and an Nvidia Quadro FX 3800M or FX2800M graphics processor. The systems weigh about nine pounds.

Lenovo on Tuesday also introduced a tower server for small businesses. The ThinkServer TS200v is available with either a Core i5 or Core i3 processor, as well as Intel Pentium or Celeron chips. The starting price is $400.

In the fourth quarter of 2009, Lenovo was the fourth largest PC maker in the world, trailing No. 1 Hewlett-Packard, followed in order by Acer and Dell. Lenovo, which is traditionally strong in the enterprise, is trying to increase market share by marketing its products to small and medium-sized businesses.