Looking To Make IT A Revenue Driver, Quintiles Turns To The Cloud

Infosario started out of a challenge several years ago from Quintiles CEO Dennis Gillings: Find a way to deliver three drug trials for the price of two and help companies navigate the drug-approval process. Quintiles hasn't yet achieved that three-for-two goal, but the systems that drive Infosario have helped it make progress.

Quintiles had to change its IT organization and infrastructure before it could deliver the capabilities in Infosario, internally and to customers. Using VMware, Quintiles recently "breezed past" an 85% to 90% virtualization target IT leaders set three years, says Joe Donnici, VP of core IT. As Quintiles builds out its private cloud infrastructure, it'll be able to provide increasing flexibility and scalability to Infosario users because data center resources will be easier to manage and reallocate.

Thomas also brought in new talent, often hiring from IT vendors and service providers to find "talent that has a mindset of serving customers," he says.

Thomas recently reorganized his IT team into one core IT organization and three customer-facing groups: an Infosario projects group, a consulting group that works with internal and external customers, and a research and development group "looking for two or three big, substantial opportunities," he says.

The IT team also had to prove it had a grip on core operational IT, before it took on an innovative effort like offering a SaaS product. Thomas points to a recent data center outage. At 2:30 on a Sunday afternoon in July, Quintiles' Bangalore network operations center, a captive outsourcing site, let Quintiles' IT leaders know that a major network node in Dublin was out from what turned out to be a lightning strike that took out one of its outsourced data centers.

Several years ago, it would have taken Quintiles hours just to get the processes going to restart critical systems. Thanks to tightly managed quarterly drills, during the July incident, the company was able to launch those processes within 30 minutes and was notifying people around the globe of the problem. Critical systems were back up and running before Asian employees were in on Monday morning.

"You build credibility, trust, and integrity over time," Thomas says. "You can't innovate on day one because the trust isn't there. But it comes from working with all the different groups in the company, and, when you say you're going to do things, to go out and do them." 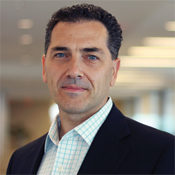 IT has been "in front of the curtain," CIO Thomas Says

Quintiles' IT team has taken a similar approach to external customers. "IT's focus has been on how to make us a better partner for pharma, and they've delivered," says Quintiles' clinical division president, Paula Brown Stafford.

Quintiles spent much of the last two-plus years figuring out how to integrate all of its data and how to make data in one silo accessible to another. It used master data management software, along with a lot of grunt work of extracting, transforming, and standardizing data from numerous databases. "Industry standards are still in formation, and it's been a challenge for companies to integrate all that data, but we've done it," says Infosario product strategy director Donna Reece.

The first customers that Infosario has brought in since it's launch earlier this summer are subscribing to slices of suite, not the whole package. Thomas describes those customers as "partners" in Infosario's development, having significant input into its features.

Quintiles isn't a software company, Thomas says, and it won't become one. In many ways, Infosario and Quintiles' own IT are one and the same, since the company is selling what it uses to run Quintiles' own operations.

Will Infosario be a revenue-driving success? That's still to be determined. But with a more reliable infrastructure in place, and a software suite that's making Quintiles' core operations more efficient, IT's off to a great start.