Windows 8 beta software gives public first chance to check out OS that will be crucial to Microsoft's efforts to become relevant in the tablet market.
Paul McDougall
Editor At Large, InformationWeek
February 29, 2012
Microsoft on Wednesday made a trial version of Windows 8 available for download to the general public, several weeks after releasing a preview of its widely anticipated new operating system to developers and IT pros. A final version is expected in the fall.

Built with touch computing and apps in mind, Windows 8 is crucial to Microsoft's efforts to make inroads against Apple and Google in the red-hot tablet market, where Redmond is significantly behind rivals following a failed campaign to convince hardware makers and telecom carriers of Windows 7's suitability as a tablet OS. 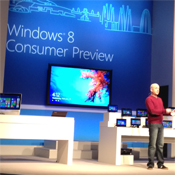 Windows 8 Consumer Preview can be downloaded for free from Microsoft's website, which also offers a diagnostic program users can run to verify that their systems are compatible with the OS.

To run Windows 8 Consumer Preview, consumers will need a PC or laptop with at least a 1 GHz Intel or AMD processor, 1 GB of RAM on 32-bit systems or 2 GB of RAM on 64-bit machines, 16 GB or 20 GB of disk space respectively, and a graphics card compatible with DirectX9 or higher.

Users will also need a touch-enabled PC to take advantage of Windows 8's touch features. A version of Windows 8 that is built to run on tablets powered by chips designed by ARM is not included in the preview. Windows on ARM is currently only available to developers.

Windows 8 Consumer Preview marks the first opportunity for the general public to see and weigh in on Windows 8, which represents a radical departure from previous Windows operating systems, including Windows 7, which debuted in late 2009.

The most notable difference is Windows 8's Metro interface, which Microsoft borrowed from Windows Phone 7. Metro is based around a home screen that eschews standard application icons in favor of so-called Live Tiles, blocks of screen real-estate that display real-time updates from social networks, instant messaging, email, and other services. Metro is also designed to run full-screen mobile-style apps.

Microsoft's goal was to introduce an operating system designed from the ground up to be used on touch-based devices like tablets, as well as touch-capable PCs. Windows 8, when run on a standard PC, also allows users to switch to the familiar Windows Explorer interface so they can interact with their system via keyboard and mouse.

"With Windows 8, we reimagined the different ways people interact with their PC and how to make everything feel like a natural extension of the device, whether using a Windows 8 tablet, laptop, or all-in-one," said Steven Sinofsky, president of Microsoft's Windows division, in a statement. "The Windows 8 Consumer Preview brings a no-compromise approach to using your PC."

Also on Wednesday, Microsoft is expected to open a beta version of its Windows Store, which will be the sole source of Metro-style apps for Windows 8. During the preview period, the store will offer apps that consumers can download and use at no charge.