Apple-Cisco Deal: What It Means For Businesses - InformationWeek

The companies entered a partnership earlier this month to build a "fast lane" for iOS business users by optimizing Cisco networks. Does a fast lane for iOS users mean a slow lane for everyone else?

In early September, Apple and Cisco announced a partnership to build a "fast lane" for iOS business users by optimizing Cisco networks. But neither company will say exactly what that entails.

"At this time we're not talking about the technical steps we're taking," said Cisco spokesperson Linda Horiuchi in a email.

But building a fast lane for iOS devices on Cisco networking equipment could prompt a legal challenge, if the technical implementation puts devices running Android or another operating system at a disadvantage. 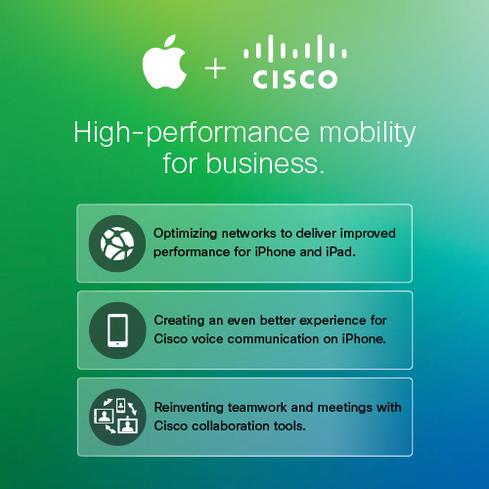 In the context of Net Neutrality, paid priortization of network traffic violates the FCC's Open Internet rules. As the agency explains on its website: "[B]roadband providers may not favor some lawful Internet traffic over other lawful traffic in exchange for consideration of any kind – in other words, no 'fast lanes.'"

Corporate networks, however, don't have to play by those rules. Network administrators have wide latitude over their network settings and the devices and software allowed on corporate networks.

"The Open Internet Order wouldn't reach this conduct because neither Cisco nor Apple are providing mass market broadband service in this scenario," said Electronic Frontier Foundation attorney Kit Walsh in an email.

Perhaps a claim of unfair compettion claim could be brought. Google won concessions from Microsoft following an antitrust complaint in 2007 about how Windows Vista treated Google Desktop Search. However, Apple and Cisco aren't subject to the consent decree requirements that Microsoft faced for past antitrust violations. Apple and Cisco are probably within their rights to create an iOS fast lane, though platform favoritism at the network layer doesn't appeal to everyone.

Frank Palermo, senior VP of digital solutions at Virtusa, an IT services consultancy, said it's good that companies can create the kinds of networks they want, within limits. "You want to allow corporations to be entrepreneurial and to exploit those opportunities," he said in a phone interview. "But for me, there has to be a foundation of equality."

Palermo says he's not privy to the technical details of the Apple-Cisco partnership. But he believes the deal will allow companies to identify iOS traffic and prioritize it on Cisco equipment. And he questions whether Apple and Cisco should be able to control whether a Samsung user should have less throughput on the network than an iOS user.

Palermo sees the Apple-Cisco partnership as an effort to accelerate current enterprise trends. "Just as Cisco in many ways has become the networking standard, I think Apple wants to be the mobile standard," he said. "We're seeing a lot of standardization in the enterprise around iOS."

Enterprises have tended to favor standardization over heterogenous environments, as the history of Windows on the desktop demonstrates. Palermo said many of Virtusa's clients favor technical consistency.

During a recent InformationWeek interview, Symantec CIO Sheila Jordan expressed similar sentiment. "Right now, we offer to the organization an iPhone," she said. "And we also offer IBM laptops and Macs. Giving [employees] a choice matters. But I can't afford, nor do I want, to open it up to everything right now."

For Apple, working with Cisco presents an opportunity to encourage businesses to replace laptops with iPads as the standard enterprise computing device. The company's recently announced iPad Pro appears to have been designed for that role, a role that will become more credible through improved compatibility with Cisco software and hardware.

Though Apple does well selling its MacBook, MacBook Pro, and MacBook Air, it controls less than 8% of the global laptop market, according to IDC. It was the leading tablet vendor in Q2, however, with almost 25% of global sales. In terms of units, Apple sold 10.9 million iPads compared to 4.8 million Macs during its fiscal 2015 third quarter.

If Apple can encourage enterprise demand for iPads, it will benefit beyond hardware revenue: Unlike OS X software, which can be sold without Apple's involvement, Apple gets a cut of all iOS software sold (excluding proprietary, in-house iOS apps).

"We're seeing a lot of organizations move their traditional applications to a tablet or mobile environment," said Palermo. "We have some clients no longer issuing laptops."

Apple appears to have a fast lane into the enterprise already.

Thomas Claburn has been writing about business and technology since 1996, for publications such as New Architect, PC Computing, InformationWeek, Salon, Wired, and Ziff Davis Smart Business. Before that, he worked in film and television, having earned a not particularly useful ... View Full Bio
We welcome your comments on this topic on our social media channels, or [contact us directly] with questions about the site.
Comment  |
Email This  |
Print  |
RSS
More Insights
Webcasts
Monitoring Critical Cloud Workloads
Disaster Recovery/Business Continuity in the New Normal
More Webcasts
White Papers
Palo Alto Networks Zero Trust Maturity Model
How DevOps Delivers on User Experience with Observability
More White Papers
Reports
Intelligent Outcomes Are Key to Business Resilience
Planning Your Digital Transformation Roadmap
More Reports