To help firefighters, the California State Assembly is considering giving them permission to take out drones in their way.

A bill being considered in the California Assembly would allow first responders to shoot drones out of the sky if they are hindering their job. This is in response to several incidents where drones hindered the efforts of firefighters and may have led to the death or injuries of people involved.

The most recent example of drones hindering firefighters came only last week when five civilian-flown drones disrupted efforts to fight a grass fire on I-15 at the Cajon Pass in southern California. The drones delayed the efforts to contain the fire by 20 minutes. The fire destroyed 20 vehicles and injured at least two people (some reports say as many as 30).

Currently, the fire is only about 50% contained, and has gone on to burn down area houses.

To be clear, no one is saying those 20 minutes specifically could have prevented any injury or property damage, but it seems obvious that if you slow down enough firefighting efforts, you're eventually going to get someone killed. And maybe 20 minutes is enough to turn a big fire into a small fire. Maybe not with this fire, but with a future fire. There have been at least two other California incidents of drones slowing down fire responses.

[And it is clear drones aren't going away. Read Drone Study Shows Consumers Are Ready. ]

The proposed legislation would allow first responders to "damage or disable drones" that are hindering their ability to do their job. A companion bill increases fines and possible jail time for interfering with fire departments. Obviously, the lawmakers' hearts are in the right place here. No one would want to see someone get hurt or a house burned down so someone can get a great picture of the scene. 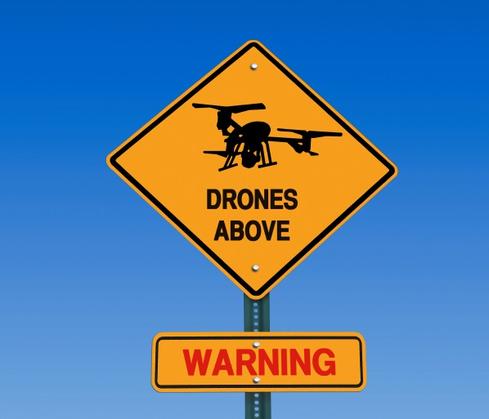 As California Assemblyman Mike Gatto was quoted saying, "Drone operators are risking lives when they fly over an emergency situation. Just because you have access to an expensive toy that can fly in a dangerous area doesn't mean you should do it."

Here is the problem. The legislation basically sets up a situation where flaming wreckage is going to be falling form the sky. Routinely.

What the bill actually does is grant immunity to firefighters, air-ambulance, and search and rescue teams who damage a drone in the course of their duties. Well how is that going to happen?

FAA rules allow devices of up to 50 pounds in weight for these drones. Do we really want first responders knocking 50 pounds out of the sky in order for them to do their jobs?

Granted, a lot of these drones aren't 50 pounds. I've argued on this page that most are soft plastic and Styrofoam, and that they pose very little threat. But there is no guarantee that form will remain the most common. What if one is a news-owned, professional drone?

By granting immunity rather than by specifying policy on exactly how those included are able to bring down the drones, the legislation is basically saying that it is OK for law enforcement to fire bullets into the air without knowing where those bullets will all land. That situation could create flaming wreckage falling from the sky, again without any knowledge of where it will land, and with no consequences whatsoever.

Does that sound like the best way to handle this?

I'm all for limiting drone activity around emergencies. It makes total sense. But why not try finding and arresting people first? Why not look for a technological solution like jamming control signals? Why not see how society adjusts to the new technology? I'm sure "new-fangled" gadgets like the camera and the phone camera caused similar issues for law enforcement at one point, and still do on occasion. Heck, it won't be long until drones can help fight the fires.

Going straight to "You are now immune. Do what you have to do" seems like overkill.

Governments seem to have a very complicated relationship with drones. They want to use them for the military and for more benign deployments. But they don't seem to want us to use them for anything. Drones have real and acceptable personal and commercial use. A law saying that you can knock them out of the sky doesn't seem to acknowledge that.

What do you think? Is the state of California justified in its proposed new law? Are there better ways to handle nuisance drones? Tell us in the comments.

David has been writing on business and technology for over 10 years and was most recently Managing Editor at Enterpriseefficiency.com. Before that he was an Assistant Editor at MIT Sloan Management Review, where he covered a wide range of business topics including IT, ... View Full Bio
We welcome your comments on this topic on our social media channels, or [contact us directly] with questions about the site.
Comment  |
Email This  |
Print  |
RSS
More Insights
Webcasts
Monitoring Critical Cloud Workloads
4 Practical Tips for Building a Data Lake
More Webcasts
White Papers
Why Energy Management is Critical to 5G Success
VPN Risk Report
More White Papers
Reports
A Practical Guide to Enabling 5G Deployments
[Tech Insights] SASE's Pandemic Boost Likely to Stick
More Reports

@Vnewman2- Yeah, I'm a bit skeptical about how easy it was to hijack the Jeep. But the one key difference here is that unlike a Jeep where you can't control the steering, if you could hack a drone, you could actually fly it because it steers by signal.
Reply  |  Post Message  |  Messages List  |  Start a Board

@jries921- Well, then one questions why drones need to be mentioned specifically. I think the reason is that they are outside the fire. For instance, if you smask a window to shoot water into a building that makes total sense to protect the firefighter. If you start blow up the house next to the one on fire so you can get a better angle on the fire, that's not reasonable.

So, the issue to me is are they taking care of these drones in a safe and effective manner, not their immunity.

I don't think any of us disagree with the notion that saving lives and property are they priorities. It is about HOW that matters to me.
Reply  |  Post Message  |  Messages List  |  Start a Board

@vnewman2- I think training is one way to put it. It might be an ettituquette thing, too. Remember when smartphones were new and people would go to dinner and ignore each other while on the phone? Eventually most (though you still see it) people adopted some rules about how to treat a phone call or text in front of live people. To me the social boundaries of drones just haven't been established yet.
Reply  |  Post Message  |  Messages List  |  Start a Board

@vnewman2- Well, that's what they tried to do. But according to firefighters, they were never able to find the owners or the drones. They kept making announcements asking them to leave. Either the drone owners got the video they wanted and flew home or they heard the announcements and eventually complied.
Reply  |  Post Message  |  Messages List  |  Start a Board

@SaneIT- I think it had to do with the helicopters and not the firetrucks on the ground. But I also think the firefighters might be a little vague on purpose. Let's face it. They don't like them. They don't want them there even if they aren't in the way. They just don't want the distraction or the potential for recording their actions. And the safety issue is real but perhaps not the only issue.
Reply  |  Post Message  |  Messages List  |  Start a Board

@whoopty- They were hindering it by flying in the space. With large grass fires (3500 acres in this case) they use helicopters and airplanes to dump fire retardant chemicals and water on the fire. If a helicopter hits one of those it puts the crew in danger. Also, if the water or the chemcials hit the drone, it puts pople below in danger.

And, for now, with no law in place, destroying one of those drones might put the fire company at risk of lawsuits or whatever.

It mostly has to do with not wanting to crash a fire aircraft though.
Reply  |  Post Message  |  Messages List  |  Start a Board

@angelfuego- Aren't you worried about the safety of others from the drones being disabled?
Reply  |  Post Message  |  Messages List  |  Start a Board
InformationWeek Is Getting an Upgrade!