Proposed FAA dividing line between model aircraft and drones is too limiting to hobbyists, says the Information Technology and Innovation Foundation and Academy of Model Aeronautics.

Proposed FAA rules would define model aircraft too narrowly and commercial drones too broadly, The Information Technology and Innovation Foundation (ITIF) protests in comments filed with the agency.

The Federal Aviation Administration is currently accepting comments on its Interpretation of the Special Rule for Model Aircraft, which attempts to clarify the distinction between a model aircraft and a drone. Model aircraft are minimally regulated, as opposed to commercial unmanned aircraft, a category for which the rules are still being written.

The ITIF is a prominent technology think tank, in a league with the RAND Corporation, with IT industry backers that include Google and Cisco. Google has bought a couple of drone manufacturers and is exploring how unmanned aircraft might fit into its operations. Hobbyist groups such as the Academy of Model Aeronautics are also protesting the proposed rules, but the ITIF's motivation is more to avoid choking off avenues for experimentation and innovation. The position paper makes a comparison with early rules limiting the Internet to noncommercial uses, which if not changed would have prevented the emergence of the whole online economy.

"We try to argue for policies surrounding the idea of permissionless innovation," Alan McQuinn, principle author of the ITIF's comments, says in an interview. In other words, the FAA should not create rules that prevent revolutionary applications of the technology from being created in some tinkerer's garage, he says.

Although the Federal Aviation Administration recently began approving the first commercial drone flights over land on a case-by-case basis, guiding regulations are required to help companies seeking to take advantage of technology understand what is and is not legal, as a rule. Under the FAA Modernization Act of 2012, Congress charged the agency with drafting rules for the commercial use of unmanned aircraft systems by September 2015. The agency has expressed confidence it will meet that deadline, although the FAA's own inspector general's office doubts it.

Meanwhile, the proposed model aircraft rule is an early indication of how the FAA will interpret the provision of the law exempting model aircraft from tight regulation and allowing them to be governed mostly by voluntary guidelines of the hobbyist community. 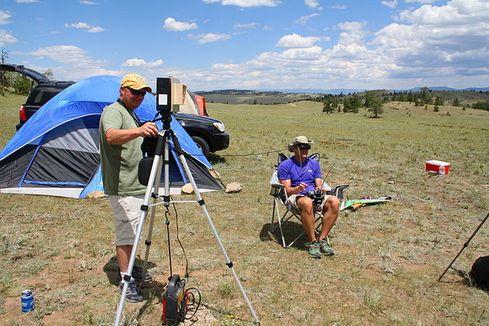 Technological advances driven by the proliferation of military surveillance and killer drones, as well as by model aircraft manufacturers and hobbyists, mean there is no longer a sharp distinction between a drone and a model aircraft. Thus the FAA considers a model aircraft to be a type of unmanned aerial system (UAS), drawing distinctions based on the size of the vehicle, as well as how it is used. A UAS consists of the unmanned aerial vehicle (UAV or "drone") plus all the remote control gadgetry.

Some parts of the law seem unambiguous. For example, in order to fall into the model aircraft category a vehicle must weigh less than 55 pounds. The FAA did clarify that the weight includes payload -- you couldn't legally operate a 30-pound aircraft carrying a 30-pound block of cheese to your picnic and claim the hobbyist exemption.

However, the rules also state that the aircraft must be operated within the "line of sight" of the pilot, and there the FAA and its critics have a difference of opinion. Model aircraft enthusiasts want to be able to use first person view (FPV) goggles, the increasingly popular accessories that allow the pilot to see through drone camera eyes. In the absence of a ruling to the contrary, groups such as the Academy of Model Aeronautics have suggested a workaround of having FPV pilots work with a copilot, or spotter, who will keep an eye on the aircraft, side-by-side with a goggle-wearing pilot. Now, the FAA is saying that its "plain language" interpretation of the law is that the pilot should be watching the aircraft with his own eyeballs.

"To ensure that the operator has the best view of the aircraft, the statutory requirement would preclude the use of vision-enhancing devices, such as binoculars, night vision goggles, powered vision magnifying devices, and

Drones with cameras and drones with guns, those are real issues / dangers but probably largely outside the scope of FAA regulation. There will probably be a whole separate set of regulations / laws from law enforcement to privacy to telecommunications (radio spectrum) governing unmanned aircraft, with more needed as time goes on for complications that have yet to arise.

The FAA's main charge is to make sure these things can operate safely in public airspace (which I guess might include that they're not carrying gun turrets), with some reasonable accommodation for hobbyist / noncommercial use of small unpiloted planes that fit into the traditional model aircraft niche. I think that's part of the White House's logic behind having another agency take the lead on the privacy / bandwidth issues (assuming the Politico report is correct).
Reply  |  Post Message  |  Messages List  |  Start a Board

I actually sympathize with the FAA. Crafting rules to cover all the possibilities is thankless and there's no way to please everyone.
Reply  |  Post Message  |  Messages List  |  Start a Board

The photography questions with regard to drones have just started. We will need much more privacy protection as consumers than the current laws ever envisioned us needing.
Reply  |  Post Message  |  Messages List  |  Start a Board

Academics have their own objections to the lines the FAA is trying to draw:

If you're thinking commercial use of small drones / model aircraft should be unregulated, you'd have to take that up with Congress. The only lattitude FAA would have is exactly where to draw the line. I thought the hobbyist group quoted in the story made a reasonable point about one sale of one photo not being enough to qualify as a business in the eyes of the IRS, so maybe the FAA should allow some latitude there.
Reply  |  Post Message  |  Messages List  |  Start a Board
InformationWeek Is Getting an Upgrade!