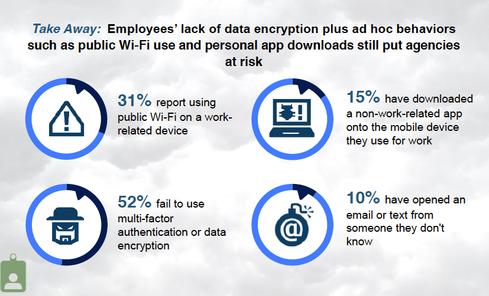 William Welsh is a contributing writer to InformationWeek Government. He has covered the government IT market since 2000 for publications such as Washington Technology and Defense Systems. View Full Bio
We welcome your comments on this topic on our social media channels, or [contact us directly] with questions about the site.
Comment  |
Email This  |
Print  |
RSS
More Insights
Webcasts
Building the SOC of the Future: Next-Generation Security Operations
ROI and Beyond for the Cloud
More Webcasts
White Papers
Centralized Security Policy Management Across Hybrid Cloud Environments Should be an Obvious Strategy
2020 Cybersecurity Report Card
More White Papers
Reports
Email Security Threat Report 2020
Special Report: Understanding Your Cyber Attackers
More Reports

One has to be careful drawing conclusions from 155 respondents to a survey representing 2 million federal workers. The results are likely reflective of the vulnerabilities agencies face, but how much so is hard to know.  Either way, its clear you can't get all of the people to follow procedures no matter how your try.
Reply  |  Post Message  |  Messages List  |  Start a Board

One of the most common causes of data getting in the wrong hands is the loss of mobile devices that often contain a frightening amount of private information. I want to share a protection option that worked for me. Tracer tags (mystufflostandfound.com) let someone who finds your lost stuff contact you directly without exposing your private information. I use them on almost everything I take when I travel like my phone, passport and luggage after one of the tags was responsible for getting my lost laptop returned to me in Rome one time.
Reply  |  Post Message  |  Messages List  |  Start a Board

This stat seems low, and also not all that scary: "What's more, 15% of government respondents admitted downloading a nonwork-related application on to the mobile device they use for work."

First of all, are those "mobile devices they use for work" all government issued? And, non-work-related applications might be things that do help with work, like a map application or something like Evernote. Without more clarification it seems premature to bash these workers.
Reply  |  Post Message  |  Messages List  |  Start a Board
Editors' Choice
Hot Topics