The slow but steady rollout of Google Fiber, the company's high-speed Internet project, continues apace with the addition of three new prospect cities.

Google extended an invitation to three additional cities to participate in its high speed Internet service, called Fiber. The cities include California's San Diego and Irvine, along with Louisville, Ky.

The announcement doesn't mean Fiber is definitely coming to these cities, a Sept. 10 company blog post noted. The next step is to begin a joint planning process with city leaders.

In the meantime, Google Fiber Expansion director Jill Szuchmacher wrote that the company is working with the three cities to conduct a detailed study of factors that could affect construction, including housing density, the condition of existing infrastructure, and local topography. 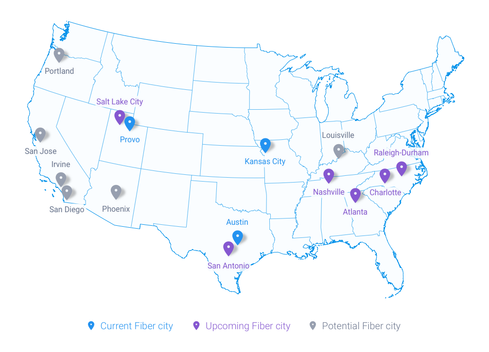 "Once we complete this planning process, we'll determine if we can bring Google Fiber to Irvine, Louisville and San Diego," Szuchmacher wrote. "Every city is different and will move on a unique timeline, so we'll keep in touch with residents about our progress along the way. And regardless of whether Google Fiber comes to the region, this process gives cities a head start in welcoming any gigabit provider to the area."

"These cities are growing tech hubs with entrepreneurial cultures -- great places to show us what's possible with gigabit speeds," Szuchmacher wrote. "It's clear that Irvine, Louisville and San Diego have strong leaders at city hall, who are passionate about bringing fiber to their communities and making the Internet more accessible for everyone."

Google's Fiber service was first introduced to the Kansas City metropolitan area in 2012, including 20 Kansas City area suburbs within the first three years.

The service subsequently expanded to Austin and Provo, Utah, in April 2013, and again in 2014. This year the program spread to Atlanta, Charlotte, Raleigh, Durham, Nashville, Salt Lake City, and San Antonio.

A company blog post cited an Akamai State of the Internet report that found the US still lags behind the rest of the world in Internet speeds, and highlighted a report from the Open Technology Institute at New America that showed Kansas City, which has Fiber, ranks among the world's speediest Web cities.

Google's Fiber focus isn't limited to cities and high-tech startups, however. In July, Google announced a program in all of its Fiber markets to connect residents in select public and affordable housing properties, free, with no installation fee.

The initiative is part of ConnectHome, a program launched July 15 by the White House and the US Department of Housing and Urban Development (HUD) to bring Internet connectivity to more school-aged children and families living in HUD-assisted housing in 28 communities across the country.

Nathan Eddy is a freelance writer for InformationWeek. He has written for Popular Mechanics, Sales & Marketing Management Magazine, FierceMarkets, and CRN, among others. In 2012 he made his first documentary film, The Absent Column. He currently lives in Berlin. View Full Bio
We welcome your comments on this topic on our social media channels, or [contact us directly] with questions about the site.
Comment  |
Email This  |
Print  |
RSS
More Insights
Webcasts
Disaster Recovery/Business Continuity in the New Normal
4 Practical Tips for Building a Data Lake
More Webcasts
White Papers
4 Key Elements of an ML-Powered NGFW: How Machine Learning is Disrupting Security
Future Proofing Your Network for 5G
More White Papers
Reports
The State of Malware Threats
2021 Digital Transformation Report
More Reports