Lenovo won't overcome its obstacles with US federal IT market due to this acquisition -- but deal will likely strengthen Samsung's position.

Google's sale of its Motorola Mobility hardware unit to Lenovo demonstrates the once-universal IT adage: "It's great to be in the software business, and not so much so in the hardware business."

The sale of the Motorola division effectively eliminates the once-proud and innovative Motorola phone brand from American ownership, and is likely to strengthen Samsung's position in the US market. The deal may complicate decisions for government IT purchasers, however, who are more sensitive about buying hardware made by Chinese firms. (Samsung is a Korean company and not under the same scrutiny. The Motorola division is not to be confused with Motorola Solutions, which specializes in land mobile and ruggedized radio gear for warfighters and first responders.)

The sale also illustrates the challenge tech companies face trying to integrate software and hardware into a single product. Samsung and Apple have made this type of integration appear seamless and profitable. While Google created the free Android operating system, it failed to make a hit combining it with its Motorola smartphones. Samsung has done the better job of leveraging the Android platform across a range of mobile devices, including smartphones and tablets, to produce a vertically integrated experience that users love.

[Google reaped a fraction of what it paid for Motorola. Was the investment worth it? Read Google Sells Motorola To Lenovo For $2.91 Billion.]

Samsung's user experience, coupled with its success making Android more secure for enterprises and individuals, has established Samsung as a dominant player in the mobile market. Samsung's colossal strength in consumer and enterprise electronics also helped meld the software-hardware experience. Google, on the other hand, coming squarely from the Silicon Valley software world, lacked the expertise and perhaps the willpower needed to truly resurrect the Motorola brand. 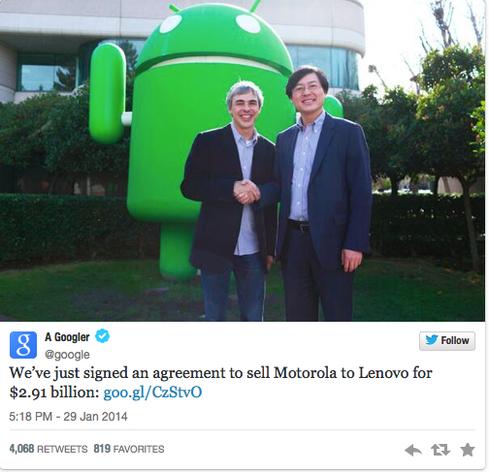 Now Google will have a new and powerful player in Lenovo to expand the Android platform. The Motorola product line may also have more luck at Lenovo, which has found that buying commodity or even distressed US IT assets can be a profitable business. The Chinese electronics maker made a splash on the global stage when it picked up IBM's PC business in 2005 and just earlier this month acquired IBM's line of low-end X86 /System X servers.

Lenovo's ready access to huge pools of low-cost labor, combined with economies of scale in its home market and nearby Asian countries, have no doubt helped the company. Its foray into mobile may mark Lenovo's recognition that most computing now involves small-form-factor devices rather than traditional PCs. Lenovo rightfully wants to protect its market share regardless of the client device or screen consumers use.

For US federal government IT purchasers however, purchasing from a Chinese company is anathema. Lenovo sales to the US government have not fared well. Motorola phones, which have lagged far behind those of Samsung and Apple, aren't likely to get much of a boost from Lenovo, at least in the US. Similarly, Huawei, another major Chinese electronics producer, is finding it difficult to navigate government waters.

With industrial spying and cyber threats on the rise, supply chain experts warn there are good reasons for the US government to steer clear of products made by Chinese-based companies -- and even American products that rely heavily on Chinese parts. Samsung, in contrast, has gone to great lengths to work closely with NSA, DISA, and other Department of Defense agencies. It has worked to protect the integrity of its supply chain by proving custody of devices using trusted US-based entities such as General Dynamics and others.

In jettisoning the Motorola hardware line, Google retains what it coveted when it acquired the company in the first place: a mother lode of patents that helped level the playing field for Google against competitors that could challenge Google's technology in the courts, if not in the marketplace.

It also lets Google stick to its core strengths: software and software platforms that harvest billions of dollars in advertising revenue each year. That will likely win points with Google's stockholders, who are accustomed to high-margin software profits, and will likely ease relations with Samsung, LG, and other smartphone makers that have built success on the Android platform.

If a company with the resources of Google and a brand name like Motorola can't get the software-hardware integration right, what does it say for other wanna-be vertically integrated entrants such as Microsoft-Nokia?

Randy Siegel is the Founder of Center Circle Consultants, which focuses on US government mobility. He's also a Principal in Acommence Advisors, a mobile advisory company. He spent more than a decade with Microsoft Corp. where he oversaw Microsoft's mobility strategy and ... View Full Bio
We welcome your comments on this topic on our social media channels, or [contact us directly] with questions about the site.
Comment  |
Email This  |
Print  |
RSS
More Insights
Webcasts
Keys to Better Cyber Risk Assessment
Data Center Network Operations (NetOps) Reimagined
More Webcasts
White Papers
CPRA: The Simple Guide
Data-Driven Vulnerability Remediation with Vulcan Cyber - A Case Study With Snowflake
More White Papers
Reports
We Need Your Input: Trends in Workforce Optimization
Intelligent Outcomes Are Key to Business Resilience
More Reports

What's worrisome about the Lenovo deal is what it says about the erosion of America's core expertise and ability to make innovative products.  For the past two decades, we've seen the hollowing out of American manufacturing as financiers kept engineering, design and marketing work here in the US, and farmed out production to China and elsewhere. It was a rationale business model that shareholders rewarded, even as it meant discarding a generation of talented American employees.

But as more companies like Motorola and their intellectual capital are sold to Chinese investors, and as China moves from hardware to software, it's hard to ignore what a slippery slope lies ahead for US industries. Firms like Tesla show the US can still lead the way in innovation. But for companies like Motorola -- once a symbol of US engineering innovation -- to end up in Chinese hands suggests that the engine of innovation in the US economy is beginning to sputter.

Google's sale of Motorola is really a testament to the declining value of hardware manufacturing in America and sadly, the rising importance of patent assets as protection to ward off corporate marauders.
Reply  |  Post Message  |  Messages List  |  Start a Board
InformationWeek Is Getting an Upgrade!