The Orion spacecraft gives NASA a ticket to deep space. Here's how NASA is preparing the spacecraft for a mission to visit an asteroid in 2025. 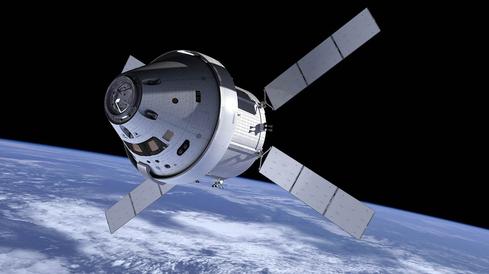 NASA has big plans to send humans to an asteroid by 2025. The mission, however, will not be possible without several important components that include yet-to-be-developed technologies, as well as the Space Launch System (SLS) and the Orion spacecraft to fly astronauts beyond low-Earth orbit. In fact, Orion's first flight test later this year will provide NASA with vital data that will be used to design future missions.

Orion will not only be used as an exploration vehicle for flying crew to space, but also for sustaining the crew during missions and providing safe reentry from deep space. The spacecraft's initial flight test, called Exploration Flight Test-1, will launch in December from Cape Canaveral Air Force Station on a Delta IV Heavy rocket. The test will involve a two-hour, four-orbit flight of the un-crewed spacecraft more than 3,600 miles into space. It will evaluate the performance of launch and high-speed reentry systems such as Orion's heat shield, avionics, attitude control, and parachutes.

A second Orion flight test, called Exploration Mission-1, is scheduled in 2017, and if that's successful, a crewed mission will take flight in 2021. Exploration Mission-1 will mark the first time Orion launches on the SLS, which is NASA's heavy-lift rocket. NASA said the SLS is more powerful than any existing rocket and will have the capability to carry astronauts to an asteroid, and ultimately, to Mars. The goal of the asteroid mission is to identify, capture, and redirect a small asteroid into a stable orbit near the moon. Astronauts traveling on the Orion crew capsule will visit the asteroid and take samples, which will then be sent back to Earth for research.

But before the mission can take place, engineers will be evaluating results from the flight tests. One major area of focus is the launch abort system (LAS), which is designed to activate in an emergency and carry astronauts away from the launch pad and the rocket. Parachute deployment, heat shield protection, radiation levels, and computer function also will be closely monitored, according to NASA.

NASA's $17.5 billion fiscal 2015 budget will support efforts surrounding Orion, the SLS, and the asteroid mission. NASA also requested that Congress approve $133 million for early development of the asteroid project. The space agency has aligned its budget with a "strategic plan" that prioritizes space technologies essential to making advances in science, aeronautics, and space exploration.

"With Orion's first flight later this year, deep space exploration is imminent, and we need the right technology to thrive in deep space," Michael Gazarik, NASA's associate administrator for space technology, said during a media teleconference on April 16.

Explore our slideshow to learn more about the Orion spacecraft, its milestones, and capabilities.

@SaneIT I've heard of those planets, but they are even further than Mars, so it'll be quite a while until we can actually draw on their raw materails. As for mining, well, even on earth is not without controversy.  The space supply chain piece is not up here.
Reply  |  Post Message  |  Messages List  |  Start a Board

@SaneIT that is not part of the plan for the immediate future. It would be problematic for a few reasons. 1. they would have to first analyze what's out there are be sure it is safe and usabel.

2. mining space bodies in that way may be seen as a kind of cosmic vanadalism, depending on one's perspective.

I believe the supplies would all be coming from earth, though it would be simpler and easier for a space station to stock the materials and then make what it needs on demand without having to wait for a delivery from earth. Also for the plan of having some midway sites, again, just having to have materials available rather than finished products -- which entails predicting exactly what is needed in all cirumstances -- would make the supply chain more viable.
Reply  |  Post Message  |  Messages List  |  Start a Board

My thought was because according to recent research AI and robotics have made great advancements engineering ethics and emotions into autonomous robots. It would make sense to have at least a combined crew rather to rely on only humans.

@SaneIT exactly!  The piece I wrote on supply chains for extended space voyages both opens and closes with references to the replicator. I think we'll have to make do withoutr the perfect cup of Early Grey (which makes me think of the failure of the machine to make tea in the Hitchhiker series). But we should be able to produce some necessary supplies and equipment on demand in space as the technology advances.
Reply  |  Post Message  |  Messages List  |  Start a Board

When they issue you your ticket to Mars, carefully check the return flight date. It will take 6-8 months to get there, depending on where in the Hohmann Transfer Orbit that you launched. More calculations needed to determine length of the return flight.
Reply  |  Post Message  |  Messages List  |  Start a Board

@SaneIT yes, it is, and there are extensive plans for a space supply chain -- the topic of a blog I wrote that should be pubished soon. One of the things that could prove helpful is 3D printing space, and plans are now set to launch a 3D printer into space in August -- the subject of another upcoming blog of mine.
Reply  |  Post Message  |  Messages List  |  Start a Board

How interesting. I recently read about a mission to an asteroid that is supposed to hit the Earth at some point in the future.

By 2025 maybe robotics and autonomous AI have developed enough to be sent in the missions instead of humans.