While the InSight mission to the Red Planet hits a delay, the space agency celebrates the 10-year anniversary of the Mars Reconnaissance Orbiter.

It seems NASA just can't get enough of the Red Planet. It's announcing that it has targeted a fall 2018 landing date for its next mission to Mars, called Interior Exploration Using Seismic Investigations, Geodesy, and Heat Transport (InSight).

The mission's goal is to study the deep interior of the planet so scientists can better understand how rocky planets -- including our own -- were formed and have evolved.

The InSight spacecraft, including cruise stage and lander, was built and tested by Lockheed Martin Space Systems in Denver, with the lander's Heat Flow and Physical Properties Package provided by the German Aerospace Center (DLR).

This probe will hammer itself to a depth of about 16 feet into the ground beside the lander. The spacecraft itself was set to launch this month until a vacuum leak forced NASA to reschedule two years into the future.

"The science goals of InSight are compelling, and the NASA and CNES plans to overcome the technical challenges are sound," John Grunsfeld, associate administrator for NASA's Science Mission Directorate in Washington, said in a statement. "The quest to understand the interior of Mars has been a longstanding goal of planetary scientists for decades. We're excited to be back on the path for a launch, now in 2018."

While it may be even farther into the future, NASA is also planning to conduct a manned mission to Mars -- work that the space agency says remains on track. 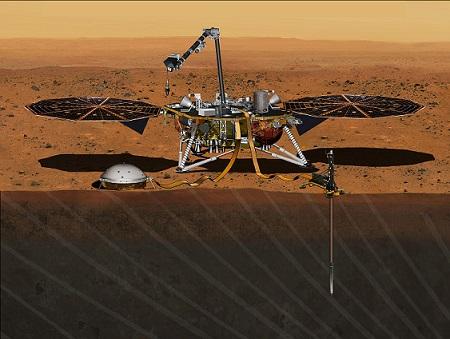 NASA is also participating in ESA's 2016 and 2018 ExoMars missions, providing telecommunication radios for ESA's 2016 orbiter and a critical element of a key astrobiology instrument on the 2018 ExoMars rover.

While NASA worked to put the InSight mission into orbit, Jet Propulsion Laboratory (JPL), a NASA research center, was celebrating the 10-year anniversary of the Mars Reconnaissance Orbiter (MRO) arriving at the planet.

One of the MRO's major discoveries -- the possibility of liquid water being present seasonally on present-day Mars, was published last year, and drew on key capabilities researchers gained from this mission, including telescopic camera resolution to find features narrower than a driveway.

The spacecraft also had the longevity to track seasonal changes over several Martian years, and imaging spectroscopy to map surface composition. Of the seven missions currently active at Mars, MRO returns more data every week than the other six combined.

"The Mars Reconnaissance Orbiter remains a powerful asset for studying the Red Planet, with its six instruments all continuing capably a decade after orbit insertion. All this and the valuable infrastructure support that it provides for other Mars missions, present and future, make MRO a keystone of the current Mars Exploration Program," MRO project scientist Rich Zurek said in a statement.

Nathan Eddy is a freelance writer for InformationWeek. He has written for Popular Mechanics, Sales & Marketing Management Magazine, FierceMarkets, and CRN, among others. In 2012 he made his first documentary film, The Absent Column. He currently lives in Berlin. View Full Bio
We welcome your comments on this topic on our social media channels, or [contact us directly] with questions about the site.
Comment  |
Email This  |
Print  |
RSS
More Insights
Webcasts
Making XDR Work in Your Enterprise - May 12
Multi-Cloud Data Management for Modern Applications
More Webcasts
White Papers
Are We Cyber-Resilient? The Key Question Every Organization Must Answer
The Microsoft Teams Telephony User Experience
More White Papers
Reports
The InformationWeek 2021 State of ITOps and SecOps Report
Cloud Misconfiguration Mayhem
More Reports