The Juno spacecraft will help NASA study Jupiter, our solar system's largest planet, and hopefully provide clues as to how the gas giant formed.

Following a five-year journey to the gas giant Jupiter -- the fifth planet from the sun and the largest one in our solar system -- NASA's Juno spacecraft successfully entered the planet's orbit.

The space agency announced that Juno entered Jupiter's orbit during a 35-minute engine burn around noon on July 4.

The purpose of the mission is to help scientists uncover the origin and evolution of the planet with the aid of nine science instruments found on the spacecraft.

Juno will investigate the possible existence of a solid planetary core, map Jupiter's intense magnetic field, measure the amount of water and ammonia in the deep atmosphere, and observe the planet's auroras, according to NASA. 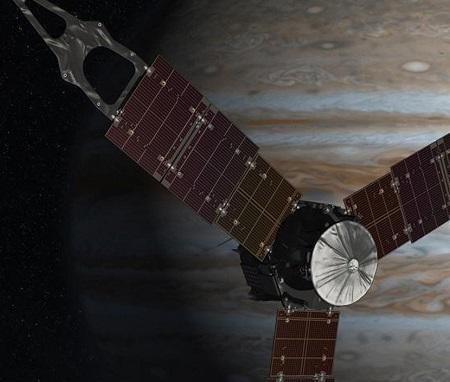 Although this is not the first time NASA has launched a mission to Jupiter, it will be by far the most intensive and sophisticated mission to the planet NASA has ever attempted. The Galileo mission studied the planet and its moons, as well as several other solar system bodies.

Over the next few months, Juno's mission and science teams will perform final testing on the spacecraft's subsystems, final calibration of science instruments, and some science collection.

Jupiter formed when gas and dust left over from the formation of the sun collected into a large sphere. Because of the radiation and magnetic fields the planet emits, keeping a complicated spacecraft fully operational long enough to collect data on Jupiter is a major challenge.

"Our official science collection phase begins in October, but we've figured out a way to collect data a lot earlier than that," Scott Bolton, principal investigator of Juno from the Southwest Research Institute in San Antonio, wrote in a statement. "Which when you're talking about the single biggest planetary body in the solar system is a really good thing. There is a lot to see and do here."

The planet itself is made almost entirely of hydrogen and helium, but it's so big that its enormous mass exerts tremendous inward pressure.

[Read about the issues with NASA's software budget.]

That pressure squeezes the interior hydrogen so strongly that the gas turns into a liquid, creating a strange form of the element that can even conduct electricity.

The Juno spacecraft, built by Lockheed Martin Space Systems in Denver and managed at NASA's Marshall Space Flight Center in Huntsville, Ala., for the agency's Science Mission Directorate, was launched on Aug. 5, 2011 from Cape Canaveral Air Force Station in Florida.

"The spacecraft worked perfectly, which is always nice when you're driving a vehicle with 1.7 billion miles on the odometer," Rick Nybakken, Juno project manager from Jet Propulsion Laboratory, wrote in a statement. "Jupiter orbit insertion was a big step and the most challenging remaining in our mission plan, but there are others that have to occur before we can give the science team the mission they are looking for."

Like the Galileo mission, Juno will meet a spectacular end once its mission is over. NASA will plunge the spacecraft into Jupiter's atmosphere, thus eliminating the possibility of contaminating local moons with terrestrial bacteria.

Nathan Eddy is a freelance writer for InformationWeek. He has written for Popular Mechanics, Sales & Marketing Management Magazine, FierceMarkets, and CRN, among others. In 2012 he made his first documentary film, The Absent Column. He currently lives in Berlin. View Full Bio
We welcome your comments on this topic on our social media channels, or [contact us directly] with questions about the site.
Comment  |
Email This  |
Print  |
RSS
More Insights
Webcasts
Monitoring Critical Cloud Workloads
Disaster Recovery/Business Continuity in the New Normal
More Webcasts
White Papers
Palo Alto Networks Zero Trust Maturity Model
Future Proofing Your Network for 5G
More White Papers
Reports
Enabling Enterprise Resiliency Through Cyberthreat Detection
The State of Cybersecurity Incident Response
More Reports