The New Horizons mission to Pluto continues to amaze, as new images reveal a complex system of geography and chemical composition.

Photos from NASA's New Horizons voyage to the outermost planet (or dwarf planet, depending on where you stand) in the Solar System continue to deliver mesmerizing and complex images of the far-flung celestial body.

The latest images of Pluto's surface show a multitude of previously unseen topographic and compositional details, including a vast rippling landscape of peculiar, aligned linear crests that have taken New Horizons team members by surprise.

"It's a unique and perplexing landscape stretching over hundreds of miles," William McKinnon, New Horizons Geology, Geophysics and Imaging (GGI) team deputy lead from Washington University in St. Louis, said in a Sept. 24 statement. "It looks more like tree bark or dragon scales than geology. This'll really take time to figure out; maybe it's some combination of internal tectonic forces and ice sublimation driven by Pluto's faint sunlight."

The NASA spacecraft also captured the highest-resolution color view yet of Pluto, as well as detailed spectral maps and other high-resolution images, which just represent a small handful of the tantalizing pieces of data New Horizons sent back in recent days. 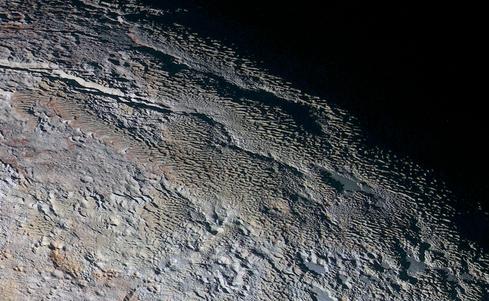 "We used MVIC's infrared channel to extend our spectral view of Pluto,” John Spencer, a GGI deputy lead from Southwest Research Institute (SwRI) in Boulder, Colorado, wrote. "Pluto's surface colors were enhanced in this view to reveal subtle details in a rainbow of pale blues, yellows, oranges, and deep reds. Many landforms have their own distinct colors, telling a wonderfully complex geological and climatological story that we have only just begun to decode."

Scientists aren't sure if the distribution of methane across the surface is because the gas is more likely to condense there or that its condensation brightens those regions.

The spacecraft's instruments found higher concentrations on bright plains and crater rims, but very few in the centers of craters or darker regions.

[See the first images of Pluto from New Horizons.]

New Horizons launched on Jan. 19, 2006 on a mission to help NASA understand where Pluto and its moons fit in with the other objects in the Solar System. Its yearlong download of new images and other data began over the Labor Day weekend earlier this month.

Beyond the new images, new compositional information also arrived from a new map of methane ice across part of Pluto's surface that reveals striking contrasts.

Adding to the complexity, analysis of the Sputnik Planum indicated abundant levels of methane, while the region the Cthulhu Regio shows none, aside from a few isolated ridges and crater rims.

Analysis found the mountains that flank the west side of Sputnik lack methane as well.

"It's like the classic chicken-or-egg problem," Will Grundy, New Horizons surface composition team lead from Lowell Observatory in Flagstaff, Arizona, said in a statement. "We're unsure why this is so, but the cool thing is that New Horizons has the ability to make exquisite compositional maps across the surface of Pluto, and that'll be crucial to resolving how enigmatic Pluto works."

Nathan Eddy is a freelance writer for InformationWeek. He has written for Popular Mechanics, Sales & Marketing Management Magazine, FierceMarkets, and CRN, among others. In 2012 he made his first documentary film, The Absent Column. He currently lives in Berlin. View Full Bio
We welcome your comments on this topic on our social media channels, or [contact us directly] with questions about the site.
Comment  |
Email This  |
Print  |
RSS
More Insights
Webcasts
What We Can Learn from Sports Analytics
The Failures of Static DLP and How to Protect Against Tomorrow's Email Breaches
More Webcasts
White Papers
Passwordless: The Future of Authentication
Universal Internet Connectivity: Reality or Myth?
More White Papers
Reports
Assessing Cybersecurity Risk in Todays Enterprises
2020 Threat Hunting Report
More Reports

That, in itself, is an issue of some interest to me. What makes understanding one phenomenon more important (or more difficult) than another? Choosing one mission over another for NASA staff must be a bit like choosing one child over another. This is my first time hearing about the lights on Ceres, but I was interested, so I looked up a bit about them. The images of them are striking. It seems the two main theories are some kind of gas expulsion, or reflection from some material (like ice or salt). I do see how one could be skeptical of these explanations - don't other planets/bodies have both those features without such bright spots? But, I'm no astrophysicist - perhaps someone with more knowledge can enlighten.
Reply  |  Post Message  |  Messages List  |  Start a Board

If these are the clearest images of Pluto, then why can't Nasa come to conclusion about the strange lights in the crater of Ceres?
Reply  |  Post Message  |  Messages List  |  Start a Board

Onwards and upwards space fans. Here's hoping The Martian can continue the momentum of Interstellar, but on a more reachable level, and continue to inspire people to be interested in space travel.
Reply  |  Post Message  |  Messages List  |  Start a Board

No doubt amazing, but some of this is certainly over my head. The wording leaves me wanting to know a little more. What's so unexpected about the crests on Pluto's surface? The fact that they're so unfirom? In the picture provided, is that the raised section towards the top of the image - would a more zoomed-in image reveal something that's more striking to the human eye? I expect the actual names for regions of Pluto's surface will be as foreign to most readers as they are to me, but it's not surprising that such a system exists. Will scientists' existing knowledge of the gas structure and resulting colors on other planets (like our gas giants) help them in understanding what's going on on Pluto? I hope these discoveries breed a generation of students as curious about space as I was at that age.
Reply  |  Post Message  |  Messages List  |  Start a Board
Editors' Choice
Hot Topics