IT folks normally can't track or manage devices once they go out on the cellular networks, but now there is a service that makes it possible. NetMotion Wireless's Locality service reports back to IT where their users are, what they are running, the quality of their wireless service, and many other data points that are otherwise out of IT's reach.
Larry Seltzer
Contributor
January 18, 2013

The industry is rich with products to manage your computers and mobile devices, but once the devices go out on the cellular networks these capabilities are lost to IT managers. Tracking devices is difficult, if not impossible with conventional tools.

NetMotion Wireless has a solution to this problem with its Locality service. Client systems, both PCs with cellular modems and mobile devices, run an agent that reports back to the service. This allows Locality to create a coverage map for the company not based on the carriers' account of service, but on the actual available service. Consider the image below: 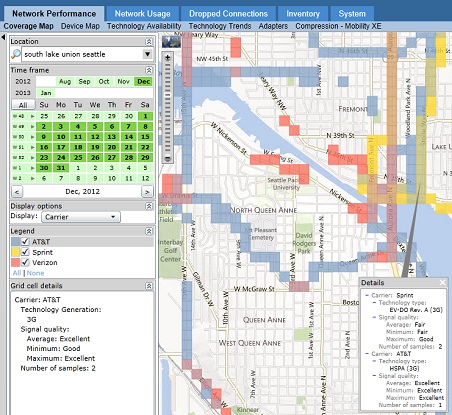 The image shows metropolitan Seattle. The software can show multiple views on the data collected, such as the signal strength of various carriers (NetMotion Wireless partners with "all major US and Canadian wireless carriers, including AT&T, Sprint, Verizon Wireless and Telus," according to the company). By zooming in on a particular location you can see specific details of the connection for a particular user at a particular point in time. 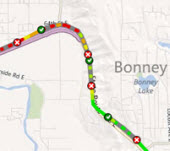 Locality Troubleshooting (Click for larger, more complete image)
Over time, the map becomes more accurate and comprehensive, and the data it provides creates troubleshooting opportunities that are otherwise impossible. Because the maps incorporate all the prior reported data, troubleshooting can be done retrospectively, meaning that IT can look into the past to see what the connection status was for a particular user at a particular time. All of this may allow companies to investigate and address problems effectively without involving the carriers. Locality will show details that are normally unknown to users and IT, such as whether users have a 3G or 4G connection, and when and for how long they were disconnected.

Locality Usage Tracking(Click for larger, more complete image)
Currently, the maps only show data collected from devices registered in the system to that customer, but it's easy to imagine the potential for sharing data between customers. Since the value of the data in a geographical region increases with the number of readings in that region, the service may be more attractive to larger customers than smaller ones. The ability to access aggregate, anonymized data from other customers in the same region would be attractive to all customers, although more so for smaller ones. Such sharing would require explicit permission, careful removal of any personally-identifiable information (like the MEID in a CDMA phone) and perhaps some customer incentives.

Even without sharing data, the service has clear benefits for smaller companies, such as inventory management of mobile devices. Even many large companies keep track of mobile devices using informal mechanisms like an Excel spreadsheet. Because these devices are mobile, the are, almost by definition, inaccurate, because they can't track location. But Locality does this automatically, presenting IT with a list of devices under management, which users are supposed to have them, their last reported location, and the date of their last report.

Locality Inventory (Click for larger, more complete image)
The same mechanism assists in security by reporting the OS and firmware versions of the devices. If a significant vulnerability is reported in a particular phone or OS version, IT can quickly find out exactly how many such phones the company has, who has them and where they are.

For clients, Locality currently supports Windows (Intel-based notebooks with cellular modems, not Windows Phone or RT) and Android 2.2 or higher. The company says it is working on an iOS client, but the nature of the app — in that it gathers and reports field test data from the phone — creates a conflict with Apple's developer guidelines for the App Store. NetMotion Wireless says the iOS version will be available Q3 2013.

Monitoring and management of mobile devices is more critical to some customers than to others. NetMotion Wireless has many government customers that use the service to track roving social services workers and police, among others, and the value in these cases is high as it helps the organization to maximize the effectiveness of the remote worker. But even among less travel-bound organizations this service should appeal to the IT department.