10 Best Business Tools In Google+
(click image for larger view and for slideshow)
Nintendo's new Wii U video game system, which went on sale this weekend, is shipping with technology licensed from Vidyo to enable video chat, social TV, and an application programming interface that will allow game developers to incorporate video interaction.

The Wii U is getting mixed reviews so far, partly because the initial release of the device is missing some of the associated TV services Nintendo has been promising. At the same time, reviewers are pointing to the addition of the GamePad remote as one of the most significant innovations because it's essentially a small tablet with its own 6.2-inch touchscreen. The same video feed can be displayed on both the big screen and the handheld, but it's also possible to watch a TV program while conducting a video chat on the handheld.

Vidyo is a videoconferencing technology player that brags about its efficient use of network bandwidth and its software-based approach, which makes its technology relatively easy to embed in other applications, cloud services, and now consumer products. Vidyo also provides some of the enabling technology for Google Hangouts.

Ofer Shapiro, CEO and co-founder at Vidyo, said he was excited to see his company's technology reach "close to ubiquitous endpoints in homes." Although the underlying technology is the same, at least initially Wii U users wouldn't be able to connect to a Google Hangout or a corporate video conference. However, as a low-cost videoconferencing device the Wii U could conceivably have a future in the small-to-midsize business market, "if that's what people wanted," and could certainly be a vehicle for video-based services such as tutoring or distance learning, he said. 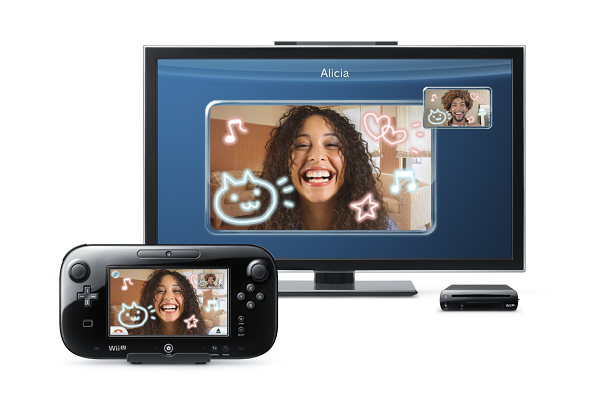 The Nintendo Wii U can display video on the TV screen, a handheld controller, or both.

Nintendo's video chat service is initially a point-to-point one, suitable for allowing family members at two locations to converse through their TVs. In the next phase, Nintendo intends to allow video connections between three locations and also support connections to mobile devices, Ofer said. "The initial application is communication, but with the APIs we also expect social gaming to play a role," he said.

In a prepared statement, Genyo Takeda, general manager of the Integrated Research & Development Division at Nintendo Co. Ltd., praised Vidyo for providing "a video solution that adapts to changing network conditions while being easy for consumers to use from the comfort of their living rooms."