SEARCH
A minimum of 3 characters are required to be typed in the search bar in order to perform a search.
Announcements
Alert
Got some free time? Grow your knowledge from the comfort of your computer for FREE!
Alert
Are you looking to stay on top of IT trends? Check out our FREE webinars and virtual events!
Alert
Planning for 2023? Be sure to check out our upcoming in-person events!
Report
How does your salary stack up? 2022 IT Salary Survey Results Revealed
PreviousNext
Government
5 MIN READ
News

OmniFocus is for people looking for a better way to manage their personal to-dos at home and on the go. It uses the Getting Things Done productivity system that was big a few years ago. The app is only for Apple devices, though, and mobile users will probably need to shell out for the desktop version, too, to be happy with the app.
Max Cherney
Contributor
June 21, 2012

OmniFocus by OmniGroup is a productivity app for people who use Macs and iOS devices. (Sorry, Windows fans.) I reviewed the iPad app here. But you really need the OS X version for the desktop, too, to take full advantage of the app.

The app is based on the Getting Things Done system popularized in a 2001 book and which since has become something of a productivity cult. Getting Things Done is a method to record, organize, and carry out tasks and ideas. People who use the system log everything they can remember or have scattered around on stickies, envelope backs, random lists, and restaurant napkins.

I have to admit that watching the tutorial videos on the Omni website were helpful in understanding how this app works. OmniFocus revolves around an inbox. The inbox is as easy and intuitive to use as Apple's mail app. The difference? The items in this inbox are always action items. The inbox is where you enter your new ideas and tasks.

From the inbox, you organize your ideas and tasks into projects, contexts, time-sensitive tasks, and flagged tasks. Each has actionable steps. 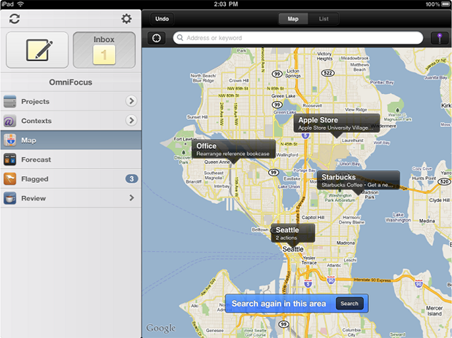 Projects are tasks that require a number of separate steps to complete, such as buying a new laptop or changing Internet providers. The key is to break out projects into clear, actionable tasks that lead to eventual completion. I found it easy to move around in the projects interface. The iPad's big screen makes it easy to add and modify existing projects.

Next, you can assign your task to a context--a place, person, or other thing--that can be used to remind you to get certain things done. For instance, a context might be "apartment", or "out," or "Jane". The best feature of context is being able to use location as a tickler. This only works for iPads with cell service. After assigning a map location to a context, you can enable OmniFocus to push notifications when you're arriving at the location or departing from it. The app even lets you specify the approximate distance--anywhere from a block to six miles --for the alert to go off.

I used location-based reminders to alert myself about my grocery list whenever I was near my favorite grocer. I also used it to remind myself about packages at the Post Office and miscellaneous computer parts I needed to pick up from my favorite vendor. After a month of field testing, I'd say it's worth using location reminders once a week to make sure nothing slipped through the cracks. Location-based reminders will be a core feature of iOS 6, so OmniGroup's implementation of this feature might change in the future, probably for the better.

I also thought the mapping tool was helpful. If you take the time to input a location for each context, you can look at all of the possible tasks and actions nearby on a Google map. 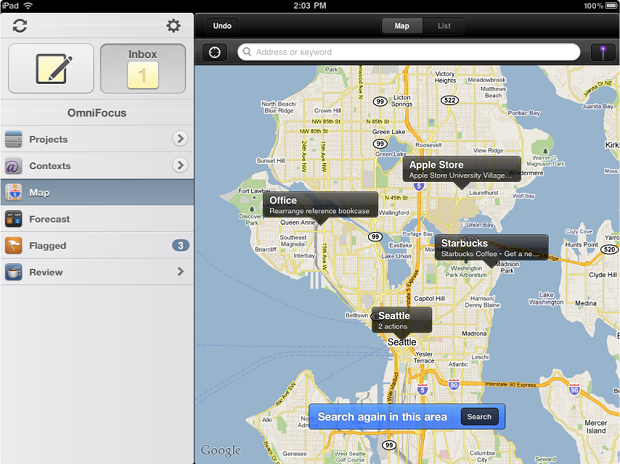 The Forecast tab helps you remember what's coming up and monitor overdue items. One recent update to OmniFocus is iCal syncing. This is helpful if you're using iCal, but the app won't talk to other cloud calendars. The Review function lets you look over all your projects every two weeks and assess their status. Some people might like an automatic reminder about all outstanding projects, but I didn't find it all that helpful.

The last way of sorting tasks is flags, which work like the flags in Apple Mail or Microsoft Outlook. OmniFocus's tutorial video suggests flagging things that are important but don't necessarily have a due date. I followed its advice and found I used my email inbox's flag a bit less as a result. But I wasn't all that impressed by flagging, either.

OmniFocus requires so much typing that I ended up installing and using not only the iPad version but the desktop app, too, to input all of my projects and tasks. I found it too cumbersome to add items to my inbox on the iPad. On the desktop, OmniFocus adds a control-click option to most apps that lets you pop an item over to the OmniFocus inbox. Plus, the app is right there ready to receive attachments from the desktop, or pastes from the clipboard. Although updating existing items on my iPad wasn't too bad, I found it a pain to add something new.

If you really don't want to pay $39.99 for the desktop version, you can reduce the amount of typing you do on your mobile device by adding action items with attachments such as voice memos, or photos taken with the camera. While these tricks didn't make typing on a touchscreen any easier, at least they saved me from having to type so much. (Another option, of course, is to get a keyboard.)

The last feature worth mentioning is Omni Sync. Enough of OmniFocus' users install it on two or more devices that Omni offers the sync service for free. Just sign up for an account, and log in to the service with each installation. Everything syncs automatically. It's easy, and it works.


This personal productivity app is an excellent choice for Apple users who want to get their lives in order at home or on the go.