Electronic Frontier Foundation and more than 100 volunteer developers are working on a tool that pairs public domain data with free software interfaces.

The Electronic Frontier Foundation (EFF) and more than 100 volunteer developers have created a public domain database to simplify the process of contacting 535 members of Congress.

The EFF, a non-profit digital rights group based in San Francisco, last week called on those with programming skills and knowledge of GitHub, a code sharing service, to help test a tool and populate an open data format that would make it easier for people to contact members of Congress. Every Congress member has a special contact form, and each form is different. While some use a CAPTCHA program, others require constituents to choose a topic from a dropdown list.

EFF partnered with Taskforce.is and the Sunlight Foundation to create a prototype of the new action tool, which uses free, customizable software to send electronic written messages to legislators by reverse engineering their contact forms. However, EFF required help from developers to test each Congressional website. "You need only basic programming proficiency to be able to help us generate the YAML files that make up the contact-congress dataset," EFF said in its instructions to participants.

The response EFF received was overwhelming. A project that was expected to take months, only took two days to complete. So far, 152 contributors have made 2,683 commits to the GitHub repository, according to the project's page on the open-source collaboration site.

"For EFF, this means a better way for our friends and members to speak out when our rights are threatened -- and that means more technology users making their voices heard in Congress," EFF's activism director Rainey Reitman said in an email. 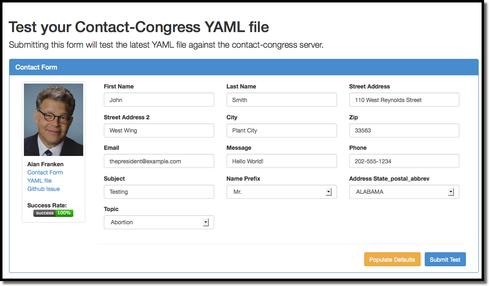 Sample of Congressional contact form developed on GitHub by the Electronic Frontier Foundation.

GitHub shows that the majority of the contact forms have been fully tested, with only a few remaining. Among them are Sen. Richard Durbin (D-IL) and Rep. Nita Lowey (D-NY) -- both of whom currently display a status success rate of 0%. EFF said some legislators "have buggy forms" and a solution is in the works.

While advocacy organizations had to use third-party vendors with proprietary software in the past to reach out to Congress members, there is now a foundation for a system that pairs public domain data with free software interfaces, says Reitman. The EFF envisions open government and advocacy organizations using the public dataset to create tools for emailing Congress.

"Who knows how many new tools will be built on top of this dataset? This isn't just a win for EFF, it's a win for democracy, which functions best when members of the public can communicate concerns to elected officials," Reitman says.

Elena Malykhina began her career at The Wall Street Journal, and her writing has appeared in various news media outlets, including Scientific American, Newsday, and the Associated Press. For several years, she was the online editor at Brandweek and later Adweek, where she ... View Full Bio
We welcome your comments on this topic on our social media channels, or [contact us directly] with questions about the site.
Comment  |
Email This  |
Print  |
RSS
More Insights
Webcasts
What We Can Learn from Sports Analytics
Strategies for Success with Digital Transformation
More Webcasts
White Papers
Presenting Your Cloud Security Strategy to the Board
Frost Radar: Global Threat Intelligence Platform Market
More White Papers
Reports
2020: Threats in Review
Are Unprotected Cloud Databases Leaking Your Data?
More Reports

What coders did for EFF and what contractors had to do w/ Healthcare.gov are two different extremes. But your point remains well taken: Taxpayers are paying a ridiculous premium for projects and coding that could be done for far less.
Reply  |  Post Message  |  Messages List  |  Start a Board

Very nice write up of this endeavor, Elena.  What the EFF and the Sunlight Foundation created in a matter of 96 hours from volunteer coding is impossibly impressive when compared to the epic fail and billion dollar boondoggle of the HHS dot gov site.  It just goes to prove that spending boatloads of taxpayer monies does not always equal quality or even basic operability.
Reply  |  Post Message  |  Messages List  |  Start a Board

This tool is good news for citizens and democracy.  One suspects however, that lobbyists will be the most adept at leveraging it. Congressional staffers will probably need some new tools of their own to deal with the deluge of new correspondence.

Now we can take the "Deport Justin Bieber" petition campaign to the next level by easily contacting every legislator. Win!
Reply  |  Post Message  |  Messages List  |  Start a Board
Editors' Choice
Hot Topics