Data Accountability and Transparency Act would make it easier to find and understand federal spending data.

Legislation to establish common data standards and build the infrastructure needed to standardize and publish the federal government's voluminous and often hard-to-find federal spending data passed the House by a unanimous voice vote Monday and is headed to the White House for President Obama's signature.

An amended compromise version of the Data Accountability and Transparency Act (S.994) was passed by the Senate on April 10. The House passed an earlier version of the bill, H.R. 2061, in November 2013, which the Senate used in crafting the final bill.

The DATA Act was sponsored in the House by Reps. Darrell Issa (R-CA) and Elijah Cummings (D-MD) and in the Senate by Sens. Mark Warner (D-VA) and Rob Portman (R-OH).

"Addressing rampant waste and fraud in government starts with making publicly accessible, structured information available online for everyone -- taxpayers and watchdogs alike," Issa, who chairs the House Oversight and Government Reform Committee, said in a statement.

"The DATA Act is a win for good government, moving the federal bureaucracy into the digital age and setting the stage for real accountability," Issa said.

[Want to share your thoughts with legislators? See Contacting Congress Just Got Easier.]

By mandating government-wide data standards, the DATA Act would put into law several key elements of President Obama's May 2013 Open Data Policy and also would improve on the Federal Funding Accountability and Transparency Act, which then-Senator Barack Obama sponsored in 2006, according to the Data Transparency Coalition, a trade group that advocates for publishing government information as standardized, machine-readable data.

"After three years of debate and negotiation over the DATA Act, Congress has issued a clear and unified mandate for open, reliable federal spending data," said Hudson Hollister, the coalition's executive director.

"Our coalition now calls on President Obama to put his open data policies into action by signing the DATA Act and committing his Office of Management and Budget to pursue robust data standards throughout federal financial, budget, grant, and contract reporting." 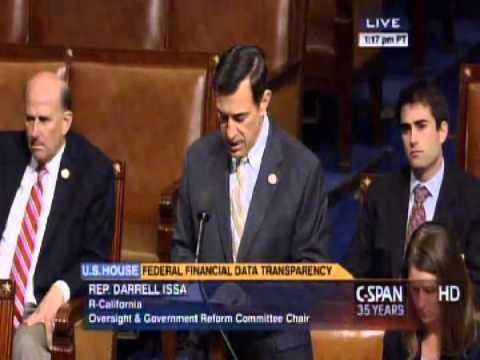 The DATA Act would:

Inspectors General and the General Accountability Office are responsible for making sure that agencies carry out the statutory provisions in a complete and timely manner, as well as ensuring that the agencies submit accurate data to USASpending.gov.

It is unclear whether the president will sign the amended bill, in part because the administration has never publicly stated whether it supports the legislation, industry observers said.

A controversial aspect of the amended bill concerns which part, or parts, of the executive branch would be responsible for establishing the government-wide financial-data standards necessary to achieve the legislation's goals and objectives.

In the current version of the bill, the secretary of the treasury and the director of the White House's Office of Management and Budget jointly share the responsibility for establishing those standards.

Industry observers believe that a joint control arrangement might make it harder to reach agreement on certain standards. Nevertheless, they say, the compromise bill retains the core objective of establishing government-wide standards for the dissemination of spending data.

Issa said on the House floor before members voted on the bill that GAO comptroller general Gene Dodaro told his committee in April that the status of federal data programs is "abysmal."

"Agencies have no standardized performance metrics for their programs," Issa said before the vote. "Agencies do not and usually cannot tell us how much taxpayer money has been spent on any given program. The spending information that is provided is often incomplete, out-of-date, and very often inaccurate.

"In order to better oversee the federal government, Congress, and even the president and his appointees, must better leverage the technology available today. The DATA Act will allow us to do just that."

William Welsh is a contributing writer to InformationWeek Government. He has covered the government IT market since 2000 for publications such as Washington Technology and Defense Systems. View Full Bio
We welcome your comments on this topic on our social media channels, or [contact us directly] with questions about the site.
Comment  |
Email This  |
Print  |
RSS
More Insights
Webcasts
What We Can Learn from Sports Analytics
Strategies for Success with Digital Transformation
More Webcasts
White Papers
A Technical Deep Dive on Software Exploits
The Network for Whatever's Next; A CxO Guide
More White Papers
Reports
The Drive for Shift-Left Performance Testing
2020 State of DevOps Report
More Reports

There's a helpful video explaining why we need the DATA Act, and therefore, why the passage of this landmark legislation is good news. You can check it out at: http://youtu.be/Bnn3IsOhulE

More Informa Tech Live Events
Securing and Monitoring Networks in the 'New Normal'Building the SOC of the Future: Next-Generation Security OperationsROI and Beyond for the Cloud