A government data repository is rebuilt on open-source code to help desktop and mobile users navigate through more than 85,000 public datasets.

The General Services Administration pulled the wraps off of a new version of Data.gov, the federal government website that offers freely available government data, tools, and resources entrepreneurs can use to build apps and create data visualizations.

The site has been redesigned to do make it easier for visitors to discover what's new and to work within the confines of mobile devices. A visitor coming to Data.gov on a smartphone or a tablet will see content that automatically adjusts to the screen's size.

The new version of Data.gov was built transparently and with help from the public, using feedback on social media platforms like Twitter and GitHub, GSA's Data.gov evangelist Jeanne Holm explained in an interview. "We decided to change Data.gov to make the site more dynamic, highlight key open data and the companies using that data, and include additional national priorities not previously featured on the site," said Holm.

The front page of Data.gov now features a rotating carousel showcasing the latest government datasets published by different agencies. The new design uses more white space and mobile-app-like icons that represent the most popular topics visitors search for, such as agriculture, consumer, energy, finance, and health. These changes aim to make it easier to navigate through site's more than 85,000 datasets. 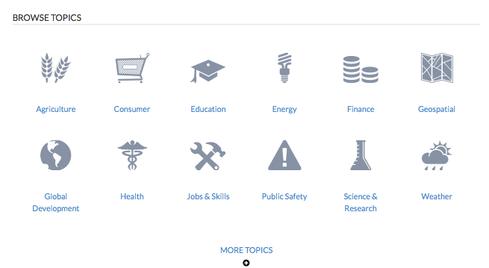 The simplified design was applied to Data.gov's new logo as well, said GSA. An American flag next to the words Data.gov has a much cleaner look than the old logo of a globe with a magnifying glass and  Data.gov's slogan: "Empowering people." The site's look and feel will continue to be updated regularly, according to the Data.gov team at the GSA.

On the backend, the site's developers have transitioned to open source systems, including WordPress and CKAN. Data.gov was previously built using a mix of open and proprietary systems, but all of the development is now public on GitHub, an open-source collaboration site for software developers.

In May 2013, President Obama signed an executive order requiring that data generated by the federal government must be made available to the public in open, machine-readable formats. The executive order was accompanied by an Open Data Policy to mandate that federal agencies manage government information as an asset. As part of that effort, Data.gov made a commitment to launch new services -- including improved visualization and mapping tools -- and API access for developers.

The administration's efforts to boost the commercial use of government data is part of a broader movement to cash in on freely available, machine-readable data, said Joel Gurin, senior advisor at New York University's GovLab, which recently released a list of 500 organizations capitalizing on open government data. A McKinsey Global Institute report released in October estimates that open government data has the potential to unlock between $3.2 trillion and $5.4 trillion in additional economic value annually across a variety of industries worldwide.

Going forward, Data.gov will see more data from federal agencies and departments in response to President Obama's executive order, Holm said. She added: "We are [already] seeing an increasing number of contributions from developers, businesses, and researchers on how to continue to make data more accessible and useful."

Here are some numbers about Data.gov from Jeanne Holm that didn't make it into the story:

The GSA team behind Data.gov does an exemplary job of reaching out to a diverse community of users and incorporating the feedback they get into the site and making continuous improvements.  The challenge remains, however, in getting agencies to provide user-friendly data sets for the broader public.  The 85,000+ sets there now represents a good foundation, and an improvement over the much larger collection Data.gov used to offer, but which typically were difficult to harvest.  Bottom line: as Data.gov keeps improving, so do the chances that smart entrepreneurs will find ways to take advantage of the government's free data.