The joint European-Russian mission to Mars launched successfully, with arrival to the red planet expected in the fall.

The European Space Agency (ESA) successfully launched its joint mission to Mars with Russia, called ExoMars, from the Baikonur Cosmodrome in Kazakhstan on a Russian Proton rocket, marking the start of a seven-month journey to the red planet.

ExoMars consists of two missions. The first contains the Trace Gas Orbiter (TGO) plus an entry, descent, and landing demonstrator module, Schiaparelli, just launched. The second, featuring a rover and surface science platform, will follow in 2018.

ExoMars, which gets its name from the term exobiology, the study of life beyond Earth, will search for evidence of methane and other trace atmospheric gases that could be signatures of active biological or geological processes and to test key technologies in preparation for ESA's contribution to subsequent missions to Mars.

Three days before reaching the atmosphere of Mars, Schiaparelli will be ejected from the orbiter towards the planet, decelerate using aerobraking and a parachute, and then brake with the aid of a thruster system before landing on the surface of the planet. 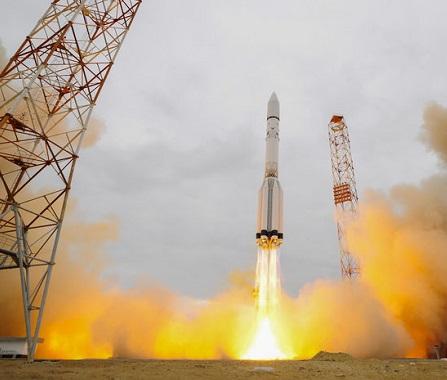 Schiaparelli will arrive at Mars during the global dust storm season, and provide new insights into the role of electric forces on dust lifting, the mechanism that initiates dust storms.

While the science possibilities of Schiaparelli are limited by the absence of long-term power and the fixed amount of space and resources that can be accommodated within the module, the operational window should be enough time to provide the ESA will valuable scientific insights.

Up above, the TGO's successful arrival at Mars would mark the second time that ESA has placed a spacecraft into orbit around the planet. It will detect a range of atmospheric trace gases with an improved accuracy compared to previous measurements.

The scientific mission is expected to begin in December 2017 and run for five years. The orbiter will also be used to relay data for the 2018 rover mission of the ExoMars program until the end of 2022.

According to the ESA, 12 missions, for a total of 17 spacecraft, are now in flight, spanning science, Earth observation, orbiting observatories, and Europe's Galileo and Copernicus programs, while nine new missions are being prepared. (NASA is planning its own 2018 mission.)

In 2016, at least five new missions are expected to be launched, a record for European Space Operations Centre (ESOC), plus two interplanetary highlights in the autumn -- ExoMars's arrival at Mars, and the controlled impact of Rosetta on its comet.

In 2018, the ExoMars rover will be the first mission to combine the capability to move across the surface and to study Mars at depth.

The mission's primary objective is to land the rover at a site with high potential for finding well-preserved organic material, particularly from the very early history of the planet.

Nathan Eddy is a freelance writer for InformationWeek. He has written for Popular Mechanics, Sales & Marketing Management Magazine, FierceMarkets, and CRN, among others. In 2012 he made his first documentary film, The Absent Column. He currently lives in Berlin. View Full Bio
We welcome your comments on this topic on our social media channels, or [contact us directly] with questions about the site.
Comment  |
Email This  |
Print  |
RSS
More Insights
Webcasts
Keys to Better Cyber Risk Assessment
How the Rapid Shift to Remote Work Impacted IT Complexity and Post-Pandemic Security Priorities
More Webcasts
White Papers
How to Avoid the Challenges of Cross-Platform Data Access Governance
Annual Cybercrime Report
More White Papers
Reports
We Need Your Input: Trends in Workforce Optimization
The Infoblox Q4 2020 Cyberthreat Intelligence Report
More Reports

Mars is sort of coming into focus as the next big destination in space, first for unmanned, then for manned space flights. But it still seems like a long ways away. With luck and good timing, it will only be 33.9 to 40 million miles. And while that's a lot of frequent flyer miles, remember, the message is going to take three minutes to reach NASA, if you want to radio home and explain you're in trouble.
Reply  |  Post Message  |  Messages List  |  Start a Board
InformationWeek Is Getting an Upgrade!