Rep. Lamar Smith wants National Science Foundation to explain why it funded the project and whether it targeted conservative speech.

The chairman of the House Committee on Science, Space, and Technology has opened an investigation into Truthy, a controversial federally funded research project on Internet memes, for allegedly targeting conservative political speech on Twitter.

In a letter Monday, Rep. Lamar Smith (R-TX) asked the director of the National Science Foundation (NSF) to explain the agency's rationale for funding Truthy and to also provide all documents and information pertaining to the project.

"Some have argued that Truthy could be used to better understand things like disaster communications or to assist law enforcement," Smith said in his letter. But it appears focused on monitoring and suppressing conservative speech on Twitter instead, the House committee chairman maintained.

[Free the web! Read Net Neutrality: Let There Be Laws.]

"Truthy was used to target political messages and commentary connected to 'Tea Party,' 'GOP,' and 'conservative,' " Smith said. "Whether by amazing coincidence or on purpose, it appears that several social media accounts that were highlighted by Truthy were subsequently terminated by the owners of the social media platform."

Smith's letter asks NSF director France Cordova to hand over all emails, letters, memos, text messages, and other records submitted to the Foundation in connection with the project. It also sought all communications involving the NSF's project-vetting and approval process for Truthy. 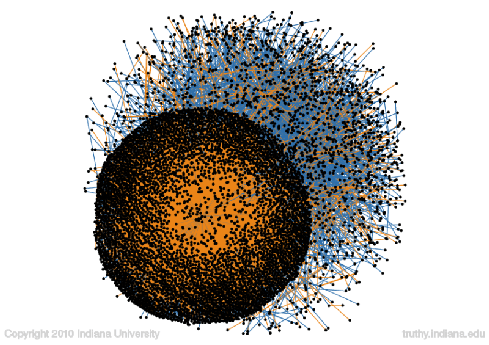 "The Committee and taxpayers deserve to know how NSF decided to award a large grant for a project that proposed to develop standards for online political speech," Smith said.

Funded in part by a $1 million NSF grant, Truthy is an attempt by researchers at Indiana University to understand how and why certain memes go viral. The effort is to see how factors like popular sentiment, user influence, and social network structures affect the spread of political, business, and social news on the Internet.

According to an official description, "the Truthy system evaluates thousands of tweets an hour to identify new and emerging bursts of activity around memes of various flavors." The data gathered by Truthy will aid in the study of social epidemics on the Internet.

Filippo Menczer and Alessandro Flammini, two professors at Indiana University's School of Informatics and Computing in Bloomington, have been running the project for nearly four years, without incident.

However, earlier this year, Truthy suddenly became embroiled in major controversy when several media outlets slammed the project as an effort by the government to create a database for tracking -- and eventually squelching -- conservative speech on social media. Some, like Fox News, described Truthy as a tool for tracking hate speech on the Internet, while others questioned why the project should be supported by taxpayer dollars.

Indeed, in his letter to the NSF, Smith alleged there were several instances where the research team described how the project targeted conservative social media messages and even hinted they were aware of social media accounts being terminated.

The project received even more negative attention in October when Ajit Pai, a Republican member of the Federal Communications Commission, wrote an op-ed in the Washington Post characterizing Truthy as a government tool for tracking and controlling political speech on Twitter.

He characterized the Truthy project as an unauthorized arbiter of what is deemed as false, misleading, and subversive speech on social media.

The Computing Research Association (CRA), Association for Computing Machinery (ACM), USENIX, and other technology groups have rallied behind Truthy and insist the project is not a liberal conspiracy to squelch free speech.

In emailed comments to InformationWeek, Strother Moore, chair of the CRA, said that some of the concerns over Truthy appear to have stemmed from a somewhat poorly worded sentence in the original project description. Though the sentence basically referred to Truthy as a tool for mitigating the diffusion of false and misleading ideas, in reality the project does no such thing, he maintained.

Menczer flatly denied that Truthy had a political agenda. "We are not talking about opinion, we are talking facts," Menczer said pointing to a total of 40 reports generated by the research team since the project went live in 2010. There is nothing in any of the reports to substantiate any of the "outlandish claims" about the project that have been made in recent months, he said.

Claims about Truthy selectively focusing on Twitter hashtags associated with conservative commentators are not supported by the facts, he said. As part of its effort to understand how political memes are distributed on Twitter, the Truthy team has collected data on both, left-leaning and right-leaning memes. It has at no point focused selectively on hashtags associated with conservative commentators, he said,

Menczer also dismissed Rep. Smith’s insinuation that the Truthy team had somehow influenced Twitter to shut down particular accounts and said there was no contact between the two. “It’s so easy to take a few words completely out of context and make it look like something ominous is going on. Right now it has become a sport [with Truthy],” he said.

Jai Vijayan is a seasoned technology reporter with over 20 years of experience in IT trade journalism. He was most recently a Senior Editor at Computerworld, where he covered information security and data privacy issues for the publication. Over the course of his 20-year ... View Full Bio
We welcome your comments on this topic on our social media channels, or [contact us directly] with questions about the site.
Comment  |
Email This  |
Print  |
RSS
More Insights
Webcasts
Making XDR Work in Your Enterprise - May 12
Multi-Cloud Data Management for Modern Applications
More Webcasts
White Papers
Are We Cyber-Resilient? The Key Question Every Organization Must Answer
Annual Cybercrime Report - Cybersecurity Ventures
More White Papers
Reports
The Need for Speed: Second Generation EDR
Trustwave Global Security Report
More Reports

It's unsurprising that entities invested in feeding the political outrage machine have taken passages out of context and made leaps to connect unrelated events. However, I'm still unclear as to exactly what concrete benefit the NSF expected to gain for that $1 million in tax dollars. If it's simply to spot trends, that's something Twitter and Facebook do all on their own, for free.

What does the agency say makes Truthy worth that investment?
Reply  |  Post Message  |  Messages List  |  Start a Board
InformationWeek Is Getting an Upgrade!