President Barack Obama enacted the nation's first open data law, signing into law on May 9 bipartisan legislation that requires federal agencies to publish their spending data in a standardized, machine-readable format that the public can access through USASpending.gov.

"Right now, federal spending data is not always readily available and, if it is, it's often in a format that is not very useful," said Mark Warner (D-VA), one of the key sponsors of the bill. "This new law requires federal agencies to account for every dollar they spend (and report it) on a single website, in an easy-to-read format. It will help us to identify duplication, waste, and fraud."

Rep. Darrell Issa, chairman of the House Oversight and Government Reform Committee and also a key sponsor of the legislation, said the law "marks a transformation in government transparency by shedding light on runaway federal spending."

"The reforms of this bipartisan legislation not only move the federal bureaucracy into the digital era, but they improve accountability to taxpayers and provide tools to allow lawmakers and citizen watchdogs to root out waste and abuse," Issa said. "Government-wide structured data requirements may sound like technical jargon, but the real impact of this legislation on our lives will be more open, more effective government." 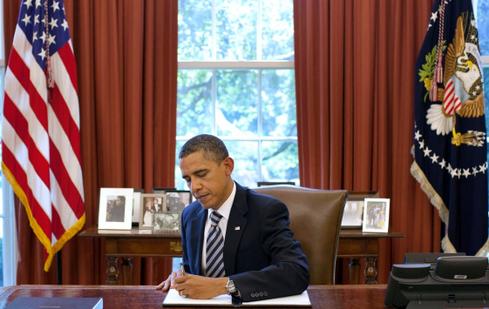 "The DATA Act will unlock a new public resource that innovators, watchdogs, and citizens can mine for valuable and unprecedented insight into federal spending," said Hudson Hollister, executive director of the Data Transparency Coalition. "America's tech sector already has the tools to deliver reliable, standardized, open data. [The] historic victory will put our nation's open data pioneers to work for the common good."

The DATA Act empowers the Secretary of the Treasury to establish a data analytics center, which is modeled on the successful Recovery Operations Center. The new center will support inspectors general and law enforcement agencies in criminal and other investigations, as well as agency program offices in the prevention of improper payments. Assets of the RATB related to the Recovery Operations Center would transfer to the Treasury Department when the board's authorization expires.

The treasury secretary and the Director of the White House's Office of Management and Budget are jointly tasked with establishing the standards required to achieve the goals and objectives of the new statute.

William Welsh is a contributing writer to InformationWeek Government. He has covered the government IT market since 2000 for publications such as Washington Technology and Defense Systems. View Full Bio
We welcome your comments on this topic on our social media channels, or [contact us directly] with questions about the site.
Comment  |
Email This  |
Print  |
RSS
More Insights
Webcasts
Enabling a Smooth DX Transformation in the Post-Pandemic New Tomorrow
[Free Virtual Event] Using Microsoft in 2020 & Beyond
More Webcasts
White Papers
Securing IT & OT in Industrial Environments
Ransomware Response Report: Trends & Outlook
More White Papers
Reports
An Insider's View into a Supply Chain Attack
AI-Augmented Attacks and the Battle of the Algorithms
More Reports

I wouldn't be surprised if this is what comes about either. Business as usual in many ways - as Obama as shown he likes to put a good spin on things instead of enacting real "change," but we'll see. Give it a year or so and maybe something useful will come of it.
Reply  |  Post Message  |  Messages List  |  Start a Board

The DOD still can't produce an auditable set of financials, so it's anyone's guess what it will and won't produce.
Reply  |  Post Message  |  Messages List  |  Start a Board

>The updated version of the bill also limits the reporting of sensitive information that is protected from Freedom of Information Act requests. Another layer of protection from public scrutiny. What this simply means in plain English is business as usual at the DoD.

I fully expect every interesting data point to be redacted.
Reply  |  Post Message  |  Messages List  |  Start a Board

Thanks, Doug, for clarifying the point about XBRL as a model, not necessarily the standard govt. might use.
Reply  |  Post Message  |  Messages List  |  Start a Board

I was suggesting something XBRL like, but not necessarily XBRL. That's for X"BusinessReporting"L, but government will demand its own format since it's not about profit and loss.
Reply  |  Post Message  |  Messages List  |  Start a Board

Doug, I agree, XBRL would be a smart way to go.  The challenge, as one Treasury commissioner told me this week, is that agencies have been machine/system centric, not data centric.  The DATA Act forces them:

1. To follow the lead of OMB and Treasury in reporting financial data;

3. Be responsive to collaborative input, from users in and outside of govt.

The challenge remains: Agencies have received no funding to accomplish this mandate. That means much of the executiion awaits system upgrades.  But enforcing a default mindset to make data transparent is an important start.

The DATA Act seems like it will shed light on where the money goes except that the Defense Department was given the option to extend implementation of the bill's requirements to enable better protection of data from damaging disclosure AKA public scrutiny. The updated version of the bill also limits the reporting of sensitive information that is protected from Freedom of Information Act requests. Another layer of protection from public scrutiny. What this simply means in plain English is business as usual at the DoD.
Reply  |  Post Message  |  Messages List  |  Start a Board

Global stock exchanges have embraced XBRL as a standardized format, and they're requiring public companies to report in this format so financial analysts and investors can quickly make sense of results. This sounds like a governmenal version of this standardized reporting approach, which is friendly to pre-defined, machine-to-machine financial analysis. Bottom line: we can look forward to faster turn-around on budget analyses, but I'm guessing it won't bring an end to the twisting of numbers that partisan party politics bring to their respective analyses.
Reply  |  Post Message  |  Messages List  |  Start a Board

How long should we expect this to take to implement? Will it be months or years before they settle on the standard format for publishing government spending data, or should we expect to see results relatively quickly? I'd think they ought to be able to adapt XML formats used for financial reporting in the private sector - am I wrong?
Reply  |  Post Message  |  Messages List  |  Start a Board

Here's hoping the fields for the federal spending data accommodate more than 14 digits, lest the program run into a Year-2000-like problem in the not-too-distant future.
Reply  |  Post Message  |  Messages List  |  Start a Board
Editors' Choice
Hot Topics