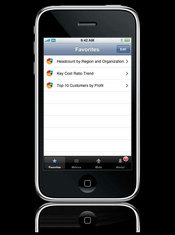 RIM BlackBerry held a commanding 41 percent of the U.S. smartphone market in Q4 2007, according to research firm Canalys, but iPhone has moved up quickly to grab 28 percent, besting Windows Mobile's 21-percent share. So why start with the iPhone rather than the market-leading BlackBerry platform?

"This is not about not doing RIM so much as it's about seeing the rapid acceptance of the iPhone," says Lenley Hensarling, a group vice president at Oracle. "Even though companies are currently paying for Blackberry, people are buying iPhones, so it's going to be there as a platform. Apple also offered a strong development kit with really good support for Web services."

"This is not intended to be a complete dashboard experience; it's about delivering selected, targeted metrics and reports from the OBIEE catalog," he says. 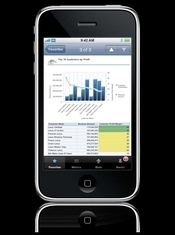 A top-10 sales report as seen on an iPhone.
(click image for larger view)
Access and security controls for Business Indicators users are handled in OBIEE in the same way they are administered for desktop users. The English-language application is available at no charge at the iPhone App Store, and it's supported in Austria, Belgium, Canada, Denmark, Finland, Greece, Ireland, Luxembourg, Norway, Portugal, Sweden, United Kingdom, United States, Australia and New Zealand.

Oracle hasn't disclosed release dates for its planned ERP and CRM apps, but Hensarling says they'll support two-way interaction rather than the read-only approach of Business Indicators. "An 'Approvals' app will be the next offering, and it will provide in-context analytic information around specific transactions, so executives will be able to confidently approve hires, purchases and expense reports on the go," he explains. "The mobile CRM apps will enable you to manage leads, contacts and accounts, and it will support mobile forecasting."

Oracle is the second BI player to announce iPhone support this week, as open-source vendor Pentaho announced on July 9 an iPhone app developed using the iUI project, which is currently hosted on Google Code.