PACCAR Revs IT Innovation Amid A Brutal Recession

The same seven PACCAR IT pros who had worked on SmartNav and NavPlus (plus whomever else they could temporarily recruit to help) turned their attention to TruckerLink in 2010. The idea was to continuously relay location and diagnostic information from the truck, but the team was stymied as it sought a cost-effective way to implement it.

In the winter of 2009, the team began talking with a startup on Third Avenue, in the heart of downtown Seattle, called SignalSet. The company claimed to have patent-pending technology that could do what PACCAR wanted, but SignalSet had no venture capital funding, a handful of employees, and no heavyweight customers.

PACCAR remained convinced that market demand was there for truck buyers and fleet managers. "A refrigerated truck that's carrying milk or meat, if it gets hung up in a mountain pass with a failed alternator, the cargo will spoil if the fleet manager knows nothing about it," says Satish Iyer, vehicle software systems manager for the TruckerLink project. The problem with existing aftermarket options is that they relied on one cellular network, which invariably had some gaps.

TruckerLink uses SignalSet's modem, which finds the strongest signal, whether it's a GSM or CDMA network. The startup had deals with Sprint and T-Mobile to provide service, and its technology would switch between them.

With PACCAR as a customer and national deals for access to cellular networks, SignalSet snared $6 million in venture capital in April of this year. Just last month, PACCAR announced its TruckerLink system is available as an add-on, and it would soon be offered as a built-in option, like the navigation systems. PACCAR has kiosks in each of its 1,900 dealer showrooms to demonstrate what the technology can do.

The SignalSet matchup solved Quinn's problem of having no wireless expertise; the PACCAR team couldn't have built TruckerLink by itself. The internal team "played a facilitating role," Iyer says. Veteran PACCAR IT pros knew the trucking industry's needs but relied on SignalSet staff, many of them recent college graduates, to create the system components. "We established a good balance between youth and experience," Iyer says. 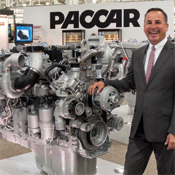 CIO Quinn: We learned to work with partners

New Skills For A New Age

PACCAR's projects did more than put vital, customer-facing new technology into its products amid a horrible economy. The projects also dared the 275 PACCAR employees assigned to them to consider new ways to collaborate with outsiders. "I think we've learned some things on this innovation journey," Quinn says.

To work on TruckerLink, the company created a collaboration room dubbed the Foundry. An open space filled with orange and blue chairs and carpeting, it has a gray swath running down the middle that instantly became known as "the road." Rob Branson, director of global infrastructure solutions and a member of the TruckerLink team, tries to make a point to use the Foundry once or twice a week to talk to colleagues or vendors he wouldn't otherwise meet with.

Now, even as PACCAR bounces back from the recession, it'll still need these new skills. Having leaped into customer-facing electronics and made IT a critical part of its products, PACCAR knows the pressure will never let up on IT to keep up with drivers' demands and rivals' products. It now has an IT staff skilled at developing products, working with outsiders when it needs to, just in case it again needs to do something it's never done before.