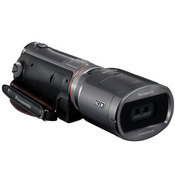 The consumer electronics company introduced the lens on Tuesday, saying it would work with select models of the company's Lumix camera line. Compatible models would be announced before the end of the year, along with the release date of the new lens.

The lens is actually comprised of two small lenses that transmit slightly different viewpoints of a subject to the camera's image sensor. The resulting picture gives the illusion of depth and appears to be in three dimensions.

Because the 3D lens is interchangeable, photographers have the option of using a standard 2D lens with the camera. But Panasonic, and other major consumer electronics makers, such as Sony and Samsung, sees 3D as the future.

Panasonic is hoping that people buying its 3D-capable Viera televisions and Blu-ray disc players will also want to create their own 3D content.

"With Panasonic's development of a twin-lens capable of 3D shooting, the company is providing consumers with a way to capture their own 3D content, which they can then enjoy watching in the comforts of their own home," Darin Pepple, senior product manager for imaging and consumer electronics at Panasonic, said in a statement.

Along with the lens, Panasonic introduced the 3D-capable HDC-SDT750 camcorder, the first such video recorder for the company. To record in 3D, the user will have to use a conversion lens that comes with the camcorder.

The lens works in a similar way as the Lumix camera lens, recording images from different viewpoints in order to provide the illusion of depth. To watch the resulting video in 3D, people will need a 3D TV. Users can also use the camcorder to record high-definition video in standard 2D.

Panasonic plans to make the HDC-SDT750 available in October for a suggested retail price of $1,399.95.

The success of devices capable of creating 3D content will likely depend on sales of 3D TVs to show the content. While sales of 3D televisions are growing, they are not enough to be classified as a mainstream market yet.

Global shipments of 3D TVs will total only 4.2 million units this year, compared to 27.7 million shipments of Internet-enabled TVs, iSuppli predicted in a report released Wednesday. The market researcher expects IETVs to be "the biggest near-term growth story," with 3D television sales picking up steam in the coming years.