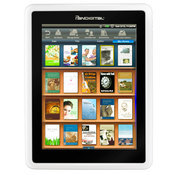 Digital photo-frame maker Pandigital has launched an electronic reader with a color touchscreen that will face off with the Apple iPad, Amazon Kindle, and others in a crowded market.

Pandigital announced the Novel on Monday, along with a partnership with bookseller Barnes & Noble, which has agreed to integrate its online bookstore into the device. Barnes & Noble sells its own e-reader, called the Nook, and offers a catalog of more than 1 million e-books.

The Novel is a multimedia device with a seven-inch glass display that has a resolution of 800 x 600 pixels. The device weighs a pound and includes Wi-Fi connectivity for buying and downloading books and browsing the Web. The Novel gets up to six hours of battery life in reading mode and has 1 GB of internal storage that can be expanded through the e-reader's SD/MMC memory card slot.

Other features include a virtual keyboard, a built-in dictionary, and the ability to display content in either portrait or landscape mode. The Novel, which is powered by an ARM 11 processor, can play music and video and supports PDF, ePub, and HTML formats. There's also a mini-USB port for moving files between the device and a PC or Mac.

The Novel's full Web browser and color touchscreen are among its biggest differentiators with Amazon's Kindle, which was the market leader last year. Unlike the Kindle, the Pandigital device also includes a built-in e-mail application and can take advantage of Barnes & Noble's LendMe technology, which lets people borrow e-books from each other for up to 14 days.

For the latest Apple tablet news, opinion and conversation, be sure to check out InformationWeek's Special Report: Tablet Wars -- Can Apple Three-peat?

The Novel is also less expensive than the Kindle, with a manufacturer's suggested retail price of $200. The Kindle starts at $259. Pandigital plans to make the Novel available in June.

Devices like the Novel and Kindle that are primarily used to read digital books, magazines, and newspapers are expected to face stiff competition this year from slate computers, such as the iPad. While the latter devices have more functionality, they are also more expensive. The iPad, for example, starts at $499.

To compete, e-reader makers will likely have to drop prices further, analysts say. An example of this likely trend is bookseller Borders' $150 Kobo that's scheduled to be available in June.