The e-book reader will have a touch screen for navigation and 3G connectivity to purchase books and magazines wirelessly.
Antone Gonsalves
Contributor
May 28, 2009 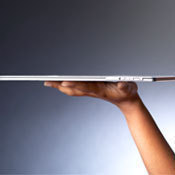 Plastic Logic has demonstrated the latest version of its upcoming e-book reader, showing off a thin device that uses its touch screen for all navigational tasks.

Richard Archuleta, chief executive of Plastic Logic, demonstrated the not-yet-named gadget at The Wall Street Journal's D7 conference. The reader is scheduled to make its debut in the market early next year.

The device Archuleta showed Wednesday is different from Amazon.com's Kindle in that it has no navigational buttons. Instead, the user flips electronic pages and performs other tasks on the Plastic Logic gadget through its touch screen.

While the device has always supported Wi-Fi, the final reader also will have 3G connectivity, like the Kindle, Archuleta said. Plastic Logic plans to offer its own online store for people to buy books and magazines. The same feature has proven popular on the Kindle. Amazon claims more than 10% of the sales of the 230,000 books it sells in electronic format and physical form are bought by Kindle users.

The Plastic Logic device is roughly the size of an 8.5- by 11-inch piece of paper, which is the same as the Kindle DX that Amazon launched this month. The Plastic Logic reader will display Word, Excel, PowerPoint, and PDF files, making it particularly useful to businesspeople.

Among the unknowns not covered by Archuleta were the price of the upcoming gadget, the name of the carrier that would provide the 3G network, and whether the device would have a Web browser. In addition, the storage capacity was not revealed.

As to the price, it's unlikely the Plastic Logic reader will be inexpensive. Amazon sells the Kindle DX for $489, and plans to start shipping the device this summer.