Avoid the shame of PUI (posting under the influence) by testing yourself and your drinking buddies.
InformationWeek Staff
Contributor
December 21, 2011

If you've been worried that playing Beer Pong and Quarters was too old hat for encouraging the consumption of alcohol by you and your friends, you can now simply state, "there’s an app for that." Designed by TDA Boulder and sponsored by Webroot, the Webroot Holiday Party Sobriety Test is now available as an app for both IOS and Android.

It's a tongue-in-cheek approach to the holiday celebration and makes it quite clear that it is not a real sobriety test. In fact, although real sobriety tests are designed to allow users to know when they've reached the legal limit on alcohol consumption, Webroot suggests that its test be taken before the user starts to do any texting or posting comments or pictures on social media sites, using the test results as a barometer to determine if you are risking becoming the "drunk posting guy" and having to deal with the subsequent humiliations. We've all seen those posts that when viewed in the cold light of morning were fortunate to be only embarrassing.

Based on the Social Media Sobriety test, which was introduced last year as a browser-based set of tests that you could take after returning home from holiday celebrations, the app version lets you take the testing to the scene of the crime and might well protect you from an overly intoxicated faux pas that you'd have to spend the next year trying to live down. By the way, we are not suggesting that you use this app to see how badly you can do after consuming large quantities of alcohol. Really. I mean it. We're not suggesting that.

When launched, the app brings up the wheel of testing; pressing the start button spins the wheel and randomly selects one of the five tests included in the app. You must repeat the process three times in order to complete the test cycle; the app selects a different set or sequence of tests each time.

The five tests are:

All of the tests are scored on a scale of 100 and your average score determines if you have passed or failed. Fail and you will be given a link to the nearest pizza joint. Pass and you win directions to a new bar. 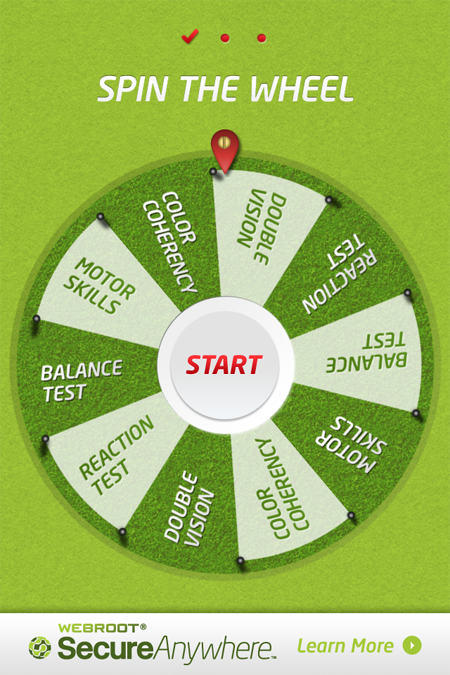