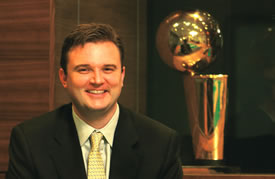 What led the Celtics to adopt visual analysis?

I worked on the investor group that bought the Celtics in January 2003, and our first step was to prioritize our challenges. It turns out that 80 percent of our variable profit comes from ticket sales. What shocked me was that Ticketmaster, our ticketing vendor, didn't have a way to show us, in real time, which seats were filled and which weren't. We had spreadsheets with that data, but we wanted a visual map of what was selling at what price.

So how did you develop that view?

All the data was available through Ticketmaster's online sales and invoicing application. It's a client/server app that syncs with Ticketmaster's servers for phone and online sales — not unlike the Sabre system that many airlines use. We use hosted [integration and visual analysis] middleware from StratBridge to tap into the data as soon as it's available.

The trick was displaying the data in a compelling way. We created different views that are useful in different contexts. For example, we have the sold or not sold view, depicted by green or red seats. We also have a percentage of potential revenue view, which lets you see where you are discounting on a single game or across multiple events. That's probably the view we use the most.

How does that help you improve ticket sales?

It gives us sort of a data warehousing tool because we can take snapshots of what's sold at a given point in time. We can then run through a slide show of, say, one week ago to today, what's selling and at what rate. That helps drive discount decisions because we can see, relative to similar games in the past, whether we're going to come up short.

Visual analysis also helped us improve our promotions. For example, if we had a hot Lakers game and wanted to package it with four other games, it was easy to do that before the season started, but it was next to impossible to do after the season began because we couldn't see what was available. Using visual analysis, we can come up with packages on the fly because we can easily find seats that are open across four games.

Do you have any data on increases in revenue thus far?

Absolutely. I'd say our returns will be in the six-figure range for this season, but it will have an even bigger impact next year because it will help us make better pricing decisions on season tickets. We knew that aisle seats tended to sell first, for example, but we didn't recognize the extent of the demand. We also discovered that the seats around the areas where the players walk in and out are in big demand, so we'll be able to get creative with pricing.

Without a visual sense of who was coming into the building and where they wanted to sit, it was like playing chess without a chessboard. In theory, you could play chess with notations and calculations in Excel, but it makes a big difference if you can actually see the demand and the revenue trends.

What do you collect? Musical soundtracks. Stephen Sondheim is my favorite. Who do you most admire? John Adams. He was the primary figure who set up the structure that has created prosperity in the United States. I am a big proponent of success following structure. What was your most memorable moment last year? Ryan Gomes lasting until pick 50 in the NBA draft when we had him ranked as the second-best wing player.