Thrutu adds functionality to calls made from your Android phone, such as being able to share images and content without your having to leave the call. Its biggest drawback is that the other person also has to be running Thrutu to get the most out of the app. Otherwise its functionality is severely limited.

Note: This review covers Thrutu for Android, but last week Thrutu released an iOS version for the iPhone as well.

Once installed, Thrutu hooks into the phone’s dialer and pops up a retractable function panel whenever you make a call. From that panel you can send a picture to the caller at the other end, remotely vibrate their phone (I’m sure there are plenty of non-controversial uses for that), open a simple whiteboarding application, send a map of your location, and send contact data.

The location-mapping feature, which Thrutu calls "Meet Me," acted strangely. With one caller in New York and a recipient in Chicago, searching for restaurants at which to meet turned up locations in Canada. Thrutu told me the app was intended more for meetings in the same general geographical area (e.g., a city). Still, I suspect it would be useful for this feature to detect long distances and compensate for them. 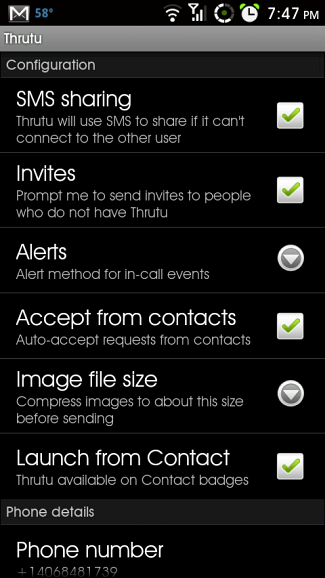 The Thrutu panel slides out over the dial pad during a call, but can be tucked away or dismissed entirely if needed.

Thrutu is also limited by the kind of network you have. You need a data connection of some kind, both to determine if the other party is using Thrutu and to perform all the actual sharing with them.

That connection must support data and voice at the same time: WiFi or GSM will work, but 3G CDMA networks will not. Google Voice numbers are also supported natively, which is a really nice touch. If the other person doesn’t have Thrutu, the program falls back to using SMS messaging to emulate some program functions. 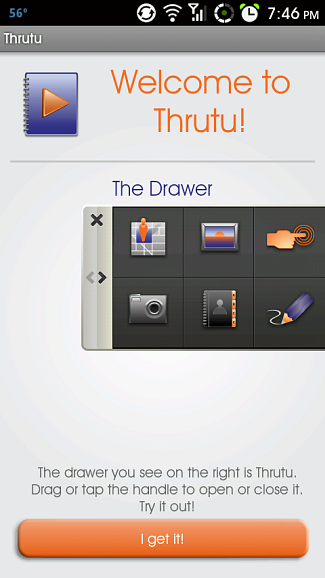 The program behaved reliably across a variety of Android phones, both stock and rooted, although there were a few minor variations in behavior. On some phones, invoking the camera app from Thrutu didn’t automatically send any of the pictures snapped from there; in those cases, I had to send them myself. The program's makers claim this is probably due to variations in the camera app across different phones. Also, on phones with small displays the Thrutu panel runs the risk of blocking some of the number pad buttons. Those with larger fingers may not appreciate this.

Right now, Thrutu is an enjoyable novelty, but I’m waiting for either a revision to the left of the decimal point or a premium version of the product to make this more of a must-have. An add-on that lets you send money via PayPal to the other caller hints at possible future directions for the product, which should be worth watching for.

Pros: Hooks automatically into the dialer and doesn’t need to be manually invoked.

Cons: Both callers have to use Thrutu to get the most out of the program; requires a simultaneous voice and data connection.