Sharing Wi-fi Is Easy With Connectify

Turn any PC with a wireless connection into a hotspot with this free but full-featured Windows 7 app.
Serdar Yegulalp
Contributor
October 19, 2011

Connectify is a simple network-connection sharing solution for Windows 7 that turns any PC with a wireless connection into a Wi-Fi hotspot. If this sounds convenient, you're probably a user; if it sounds like a problem, you're most likely an IT manager.

Using Connectify is simple enough. Install it on any Windows 7 computer that has a Wi-Fi network adapter and set a name and password for the hotspot. That's it. Now anyone who wants to connect can simply do so as if he were using a conventional Wi-Fi access point.

That's not all there is to Connectify, unlike some of its competitors. In addition to being simple for novices to use, Connectify has lots of handy tools for pro users and IT folks. For instance, settings from the program can be exported and re-used, and you can clone the settings from another Wi-Fi network to act as a repeater for that network. Universal Plug and Play services and forwarding are available. To free up resources, a user can be automatically disconnected after a few minutes' idle time. What's more, Connectify is fully command-line scriptable, so you're not stuck exclusively using the GUI to manage the program. 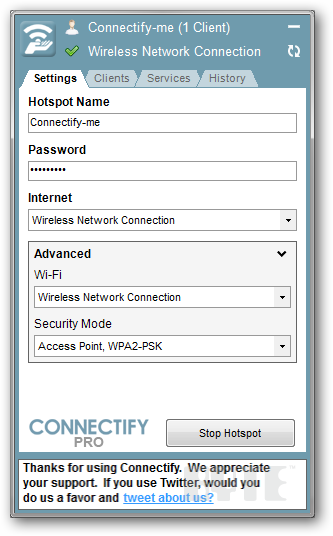 Connectify requires nothing more than setting up a password and a connection type to turn any notebook into a Wi-Fi hotspot.

Even without paying for the app, its benefits are clear. One can re-share a network connection in a hotel room or from a wireless plan. It's also a useful way to extend the range of an in-house router without buying a repeater or other hardware--all you need is a notebook with Wi-Fi.

IT managers, however, will want to be take note of how Connectify and other similar apps can constitute a security loophole. They allow anyone with software-installation privileges to bypass outside network security and create an instant on-ramp to an internal network. The default security for connections in Connectify is WPA2-PSK, but it's also possible to use WEP or even no security at all, effectively allowing any notebook to become an open-access hotspot.

Another caveat is that it's assumed the users connecting to the system will be essentially anonymous--that anyone who has the network password can get in. You can restrict specific systems (by their MAC addresses), but there's no way to tie access to, for instance, an ActiveDirectory or LDAP entry.

Security and other caveats aside, this is an immensely useful program, even in its simplified free incarnation. I've come across a couple of other freeware apps that do the same thing, but they either had major stability issues or were too minimal to be really useful.

Based in Long Island, N.Y., Serdar is founding senior editor managing reviews at BYTE. He's a well-known tech reviewer in multiple media. Follow him on Twitter as @syegulalp and email him at [email protected].