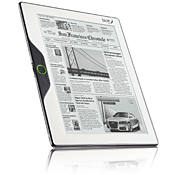 Skiff on Monday introduced an electronic reader with an 11.5-inch flexible touchscreen that the company claims is the highest resolution e-reader display to date.

The Skiff Reader will download e-books and other content via Sprint's 3G wireless network, and is capable of displaying newspapers and magazines in their original graphic formats, according to the company. Content for the device would be purchased online through the Skiff Store.

The company plans to preview its device at the International Consumer Electronics Show, Jan. 7-10 in Las Vegas, Nev. Because of its size, the Skiff Reader would likely compete against the Amazon Kindle DX and Plastic Logic's upcoming Que e-reader.

The Skiff Reader is just over a quarter-inch thick and features an e-paper display based on a thin, flexible sheet of stainless-steel foil and developed by LG Display. Other e-reader screens use a rigid screen design.

Skiff has signed a multi-year agreement with Sprint to provide 3G connectivity in the United States. The reader is scheduled to be available this year in more than 1,000 Sprint retail locations, as well as through the carrier's Web site. Pricing for the device was not disclosed.

In addition to 3G support through Sprint, the Skiff Reader will support Wi-Fi connectivity. However, the device appears only to be able to access Skiff's digital store. The company did not announce any deals with publishers, or the number or price of e-books that would be available.

Amazon offers 400,000 books, newspapers and magazines for the Kindle DX and its smaller cousin the Kindle. Barnes & Noble entered the e-reader market in late October with the introduction of the Nook, which has a six-inch display like the Kindle. B&N offers more than 1 million titles for the Nook.

E-readers were among the hottest-selling items in the holiday shopping season. Forrester Research predicted that 3 million units would be sold in 2009 in the United States, with 30% of those sales occurring in November and December. Amazon's Kindle e-reader topped its 2009 bestseller list. Next year, U.S. sales will reach 10 million units, Forrester predicts.