Three handsets with strong multimedia and gaming abilities including motion controls along with PlayStation 3 integration may help the company revive its sales.
Marin Perez
Contributor
May 29, 2009 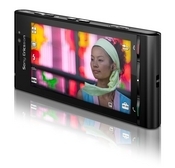 Sony Ericsson has been facing some rough business months lately, and it unveiled three handsets with strong multimedia capabilities to help it mount a comeback.

The company showed off the Idou during February's Mobile World Congress, and it packed a whopping 12-megapixel camera and a 3.5-inch screen that can have a widescreen ratio. Sony Ericsson renamed the device the Satio, and said it would available in select markets in the fourth quarter of 2009.

The Satio will run Symbian S60 5th edition, which means it will be capable of using thousands of applications. The camera has a digital zoom, xenon flash, face-detection and image-stabilization software, and the ability to geotag photos.

The Satio will have built-in Wi-Fi, 3G, and EDGE to keep users connected on the go. Other chipsets include Bluetooth capable of A2DP, and a GPS chip that can be used for location-based searches. Users will also be able to play 3-D and high-definition games on the Satio, and watch various types of media files.

The Yari is another midlevel handset that's trying to capitalize on the boom in mobile gaming. The candy bar-shaped phone has accelerometers that can be used for motion controls with games, which is similar to how Nintendo's Wii controllers work.

The handset is not just for fun and games though, as it also packs a 5-megapixel camera, assisted-GPS, instant messaging, and Microsoft Exchange ActiveSync support. The Yari is slated to be released in the fourth quarter.

Sony Ericsson also announced the Aino handset, and it's aimed at users who want to access their videos on the go. The handset has a slide-down numeric keyboard with a 3.2-inch touch screen, and users can stream video, music, and other content from a PlayStation 3 on to the handset via Wi-Fi or a cellular data connection. The Aino can also be used as a remote control for the PlayStation 3, and it can view several European TV stations.

The handset has an 8.1-megapixel camera with image stabilization software, Wi-Fi, 3G connectivity, Bluetooth, YouTube access, assisted-GPS, and an FM radio. The Aino is expected to be released in the same time frame as the Yari and the Satio.


Take part in our survey on regulatory compliance by May 29 and be eligible to win an Apple iPod Touch valued at $299.