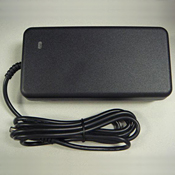 Sony recalled 69,000 AC adapters that ship with some Vaio docking stations and all-in-one desktops, saying the devices could deliver an electrical shock to users.

The problem stems from insulation inside the adapter that can fail over time, posing "an electrical shock hazard to consumers," the CPSC said. Sony has received four reports of adapters short circuiting, but no injuries have been reported.

The model number of the faulty adapter is VGP-AC19V17, which shipped with VGC-LT and VGC-JS2 series all-in-one Vaio desktops. Model numbers of the affected docking stations are VGP-PRBX1 and VGP-PRFE1.

Sony has set up a Web site that gives instructions for getting a replacement adapter. Sony also has set up a toll-free number, 877-361-4481.

The latest recall was the second involving Vaio PCs in 13 months. Sony in September 2008 recalled 440,000 Vaio laptops worldwide because of an overheating problem that caused more than a half dozen minor injuries.

The recall of Vaio TZ-series PCs was due to "irregularly positioned wires" and/or a dislodged screw near the computer's hinge that can caused a short circuit. The laptops cost between $1,700 and $4,000 and were built in Japan and the United States.