The organic light-emitting diode color display is flexible enough to wrap around a pencil without distorting a moving image.
Antone Gonsalves
Contributor
May 27, 2010 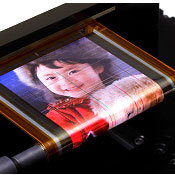 Sony unveiled the super-flexible, organic light-emitting diode (OLED) color display Thursday at the Society for Information Display International Symposium in Seattle. The display is a bit larger than four inches wide and is fully functional when flat or rolled up.

Flexible displays are not new, but Sony is the first to demonstrate one that can be wrapped around a pencil without any distortion to a moving color image. A Sony demonstration video shows the screen being wrapped while displaying a video of a car race.

Flexible displays are one element in making future electronics more convenient. Such devices could be used, for example, in wallpaper that shows video, foldable TVs that people could take to the beach, or in a wrist-top computer.

However, before such devices could become reality, a lot more innovation would be necessary. That's because all the underlying electronics and circuitry would also have to be as flexible as the display. Sony says it will continue working on the displays because "the application of these developments is expected to yield thin, light-weight, durable, and mobile devices with enhanced form-factor."

Sony achieved such impressive flexibility with its screen by replacing the rigid, silicon-based integrated circuits in today's displays with organic materials. The screen is a high-resolution 432 by 240 pixels, which is about the same as many mobile phones on the market.

Sony claims the screen consumes material and energy more efficiently than current technology, making it easier on the environment. The company did not say when the technology could find its way into products.

Sony first showed a prototype of the flexible display in May 2007. The 2.5-inch diagonal color screen had a resolution of 120 by 160 pixels. The prototype had only a fraction of the flexibility of the latest screen.