Spotlight - Plugging In with James Cates

James Cates is the CIO of Brocade Communications Systems in San Jose, Calif. — a company worth $1.5 billion. Over many years, he has refined a system of making enterprises more intelligent in a very focused, cost-effective way.

It starts with his "Ladder of Business Intelligence," or LOBI, about which you can find more information in chapter 16 of the book CIO Wisdom: Best Practices from Silicon Valley (Prentice Hall, 2003).

Q:You say that it's necessary to put data in context (such as business role context) in order to transform it into information. There are many imaginable ways of accomplishing that task in the real world. How do you approach the problem in a way that keeps operations in step with corporate strategy?

A:What if I were to ask you: What are the one to 10 questions that, if you could answer every day, would allow you to perform your job better? And you can do that across an entire company, which represents about 100 to 120 business roles. Then you say, which business roles are most important? Which ones do I want to automate first? I always start with the CFO because he or she has to go to the street. Then you check out the CEO. It's not so easy to see which roles, if you automate them, give the company the best value. It may very well be that automating your purchasing people — the ones who are cutting the deals with your suppliers — may be more important than automating a set of middle directors.

When I ask the requirements of business units, I no longer ask for an exhaustive list written in prose. I just ask them to give me the questions. They're only 10 or so questions and have nothing to do with technology. Then I just build this (what I call BRIA [business role information analysis]) table that shows question, information, data, and data source. And then anybody can look at the table and spot problems.

I've had VPs look at it, saying, what's the value of that question? The type of discussion that can occur on something that simple has saved millions of dollars, because IT doesn't go off and implement things that people thought were valuable down in the organization and — because the way those requirements were expressed was so wrapped in technology — the VP or somebody never would've caught it. 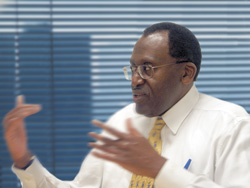 Most of your power comes when something is simple and a lot of people can look at it. You don't know right away what business role is going to give you the insightful question or answer — but if it's hidden in technology, my point is, they'll never see it.

Once you can figure out all the information that a role needs to answer the key questions, then it becomes a matter of what we call "business role competency." It's no longer technology. Now, it's the human. In other words, now that I'm giving you information to deal with, can you use it? Do you have enough experience? I'm telling you everything about your ecosystem that you say is important. I'm still dependent on the human to say, okay, here's what I ought to do. But now at least you've narrowed it down to: Can this person do the job or not? And if they say, well, I need more information, you say, well, what? And finally somebody has to make a decision.

Q:Your LOBI triple, which underpins every level of the LOBI, is people, process, and technology. It seems like you have a lot of the "people" aspect worked out to a high degree. What's the hardest part of the triple to address? Are there technology gaps that get in the way, for instance?

A:The last gap for me was the business-role driven BAM [business activity monitoring] tool. And while it's not out there big time, there are enough small companies [providing that capability]. In particular, the one that I've hooked up with [Celequest] seems to be solving that problem. Will things get better? Probably. I mean, take data warehouses: It used to take a long time to build a data warehouse, but now, with Informatica and [others], you can get models out of the box and you just have to learn how to instantiate them.

The real challenge in the LOBI triple is still the first tuple and the second tuple [people and process]. Those are more the inhibitors now. It's not the technology.

A: It's a challenge. Back up another step: How do you get people in general to really embrace the power of process? To automate something, you have to have a process that's agreed to. If you had a nice table of processes (like quote-to-ship), you could track them and have measurements, and as the company was scaling you would recognize which of these things you have to change [as you reach milestones of scale]. It gives you a set of gauges to keep your company efficient.