10 Best US Cities For Tech Jobs In 2016
(Click image for larger view and slideshow.)

That call at a May 17 hearing may go even further in boosting the results of the Joining Forces initiative, a five-year-old program launched by First Lady Michelle Obama and Vice President Joe Biden's wife Jill Biden. Earlier this month, Joining Forces announced that 40 companies pledged to hire or train more than 110,000 veterans and military spouses over the next five years.

While unemployment among veterans is on the decline and is now below the national average, it was previously more than 12% in 2011, according to Joining Forces. But more can be done, according to veterans and tech companies.

During the House hearing, Veterans in Tech: Innovative Careers for All Generations of Veterans, one speaker, Bernard Bergan, a technical account manager at Microsoft and a former member of the Army, called on Congress to pass legislation that would support the use of veteran programs, such as the Microsoft Software and Systems Academy (MSSA), either on or off military bases.

As an example, Bergan noted that although technical training programs are offered for free to vets by some private employers, it can be difficult to gain the approval from a commanding officer to allow people on active duty to spend weeks away from military obligations in order to get the technical training they need to ease the transition out of the service and into the public sector.

"Giving up a body is a difficult decision" Bergan said during the hearing, noting he was fortunate, however, to have a commanding officer to allow him to train in the MSSA program. "He was willing to lose 22 of his best servicemen ... [T]he exit out of the military was well planned, just as our entrance into the military was." 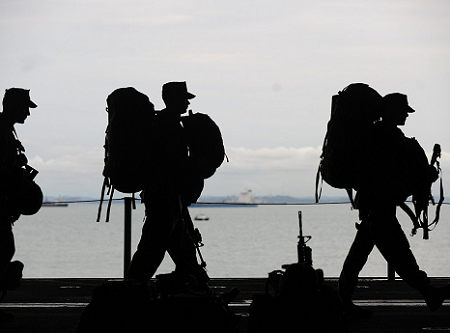 MSSA is an 18-week program to train active duty military members in IT skills at bases throughout the US. Bergan recommended the Department of Defense encourage senior leaders to support this training for those who are transitioning out of the service.

Brian Huseman, vice president of public policy at Amazon, made a similar request at the hearing. He advocated active-duty military members be trained in IT before they leave the service in targeted in-demand areas like cloud computing. The online retailing giant, which operates its Amazon Warriors program, announced this month, says it plans to offer more than $7 million in AWS training to "10,000 service members, transitioning veterans, and military spouses."

In addressing the subcommittee hearing, Brad Wenstrup, House subcommittee and chairman, said, "We need to figure out how to connect these (veterans) to companies, as well as get them into the necessary training programs to cover any skills gaps that may exist before they enter the tech field. There is a great potential between our nation's veterans and tech companies."

That sentiment was also shared by Joseph Kernan, senior vice president of corporate development and marketing for SAP National Security Services and a retired US Navy vice admiral. Kernan, who spoke at the hearing as chairman of NS2 Serves, an independent nonprofit established by SAP National Security Services, said information technology is ideally suited for veterans, regardless of the occupation they were trained for in the military.

He noted there are certain skills developed in the military that are transferable to tech positions, such as accountability for one's actions, commitment to the task at hand, and responsibility. But he noted the transition is not an easy path when leaving the military.

"Transitioning to the civilian workforce is often daunting, particularly for young enlisted service members," Kernan said during the hearing. "They don't want a hand out, but rather an opportunity for a fresh start in their post military lives."

Dawn Kawamoto is an Associate Editor for Dark Reading, where she covers cybersecurity news and trends. She is an award-winning journalist who has written and edited technology, management, leadership, career, finance, and innovation stories for such publications as CNET's ... View Full Bio
We welcome your comments on this topic on our social media channels, or [contact us directly] with questions about the site.
Comment  |
Email This  |
Print  |
RSS
More Insights
Webcasts
Making XDR Work in Your Enterprise - May 12
Multi-Cloud Data Management for Modern Applications
More Webcasts
White Papers
Enabling Enterprise Resiliency Through Cyberthreat Detection
Are We Cyber-Resilient? The Key Question Every Organization Must Answer
More White Papers
Reports
2021 Application Security Statistics Report Vol.1
Intelligent Outcomes Are Key to Business Resilience
More Reports

Impactnow, yes, Rosie from the Jetsons! :) I'd love that, too. Last year, I met a robot at a conference (and We were talking) that might be able to do all what you say. This robot's main job was as customer service in retail. In Europe, cashiers are being replaced by self-service machines. You scan your items, pay, go. I have used these in several countries already. Re-stocking could be done by robots in supermarkets soon as well. Then you have chef Watson from which I have tried a couple of dishes. :) There is so much going on that it's impossible to keep track of everything. But, robots and AI are already here. -Susan
Reply  |  Post Message  |  Messages List  |  Start a Board

Susan oh yes I know of iRobot vacuums and in our airports all feature ordering food on iPads. There is however no full service robots to clean my house--I would buy them tomorrow! I also have never seen a robotic landscaper that pulls weeds! The self-service and somewhat automated are becoming a reality but I still haven't seen a full service robot for consumers. I have witnessed the robots in factories but I still want Rosie from the Jetsons!
Reply  |  Post Message  |  Messages List  |  Start a Board

Impactnow, would you be surprised if I tell you that some of those jobs you mention are done by robots in some places already? There are complete restaurants that function with iPads and robots. There are robots in hotels, and there are several robots that you can have at home for cleaning. -Susan
Reply  |  Post Message  |  Messages List  |  Start a Board

Broadway the reality is that we still need people in manual labor jobs we need people to cut our hair, do our nails, fix our cars, clean our homes, fix our computers, serve our food, fix our roof, inspect our bags. All of these jobs will still need to exist while they may not be high paying careers they still fulfill a need for both parties. Not every individual wants to go to college or is interested in jobs that require a degree, as a society I think we need to respect this choice. Robots will eliminate some rote jobs and already have taken some of these jobs but there are still many out there for those that want that type of job.
Reply  |  Post Message  |  Messages List  |  Start a Board
InformationWeek Is Getting an Upgrade!