Government agencies are embracing social media, using Facebook, Twitter, and other platforms to inform and interact with the public. Take a look at the best examples of social networking in government.
J. Nicholas Hoover
Senior Editor, InformationWeek Government
February 17, 2012 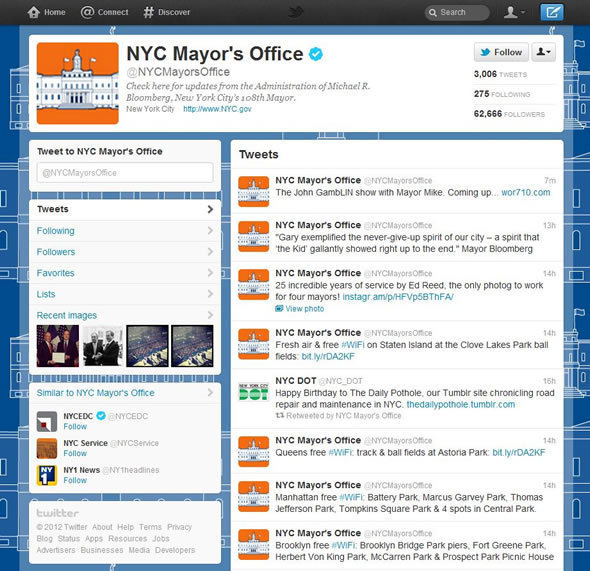 Mayor Mike Bloomberg announced recently that New York City was launching social media streams on Facebook, Foursquare, Tumblr, and Twitter. "With these new channels, the city will be able to get New Yorkers the information they need in the way they want to get it," Bloomberg said.

It's the latest example of how local, state, and federal government agencies are using social media platforms and technologies to engage the public in a variety of ways, from providing information on government services to emergency response.

It's increasingly difficult to find a government that's not involved in social media in some form. Even the tiny town where I grew up, Sykesville, Md., has both a Twitter feed and Facebook page.

Governments are using social media for everything from handling 311 service requests to hosting real-time interviews with public officials to crowdsourcing ideas around public policies.

At the same time, federal officials at the Department of Homeland Security are monitoring the buzz on social channels for threats to national security, and the FBI is looking into similar capabilities. That has sparked privacy concerns in some quarters, underscoring that agencies' social media policies must take into account a range of potential issues associated with their use of these new tools.

Here are 14 social media initiatives that are among the best of the bunch in government, starting with New York City.

The New York City Mayor's Office's Twitter feed is just one of several dozen social media sites managed by different departments of the city government in New York, but it's one of the most active. The feed includes Tweets on city news, links to press conferences, responses to citizen questions about city policy, and more. It's also frequently re-Tweeted by other New York City government agencies.