From dropping SteadyState to the lack of touch support, universal software updates, or third-party hardware support there's still a great deal missing from the Microsoft operating system. Some, inexplicably, didn't carry over from XP or Vista and others still haven't materialized despite widespread, ongoing demand. Why would Microsoft skimp on offering features that seem in their best interest to provide natively? One possibility is that they don't feel that way -- because they're waiting for so
Serdar Yegulalp
Contributor
January 27, 2011 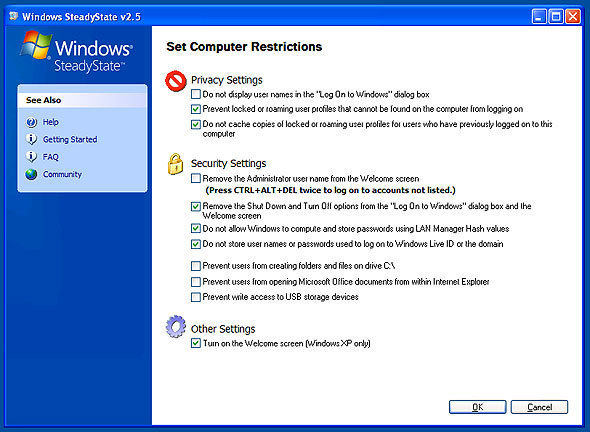 SteadyState offered a single point of control for many system-protection features that exist in Windows 7, but are no longer managed through a single console.

Windows does not have, by default, a single all-encompassing mechanism for returning the entire system -- user settings, data on disk, etc. -- to a given state. There are plenty of scenarios where this is useful, from rent-by-the-hour PCs to computers in institutional environments like schools or libraries. But for a long time the only way to accomplish something like that was through a not-very-elegant combination of native Windows features and third-party products.

Microsoft introduced SteadyState as a free add-on for Windows XP and Windows Vista, but when Windows 7 came out, admins were dismayed to learn SteadyState didn't work reliably with it, and begged to have SteadyState updated for the new OS. Instead, Microsoft announced that support for SteadyState was being discontinued.

More On SteadyState: What Windows 7 Is Still Missing

Windows 8 Too Late For Slates?