U.K. is adding jobs at a fast clip, despite its overall economic sluggishness. Why, then, are IT hiring numbers so unimpressive?
Gary Flood
Contributor
February 06, 2013 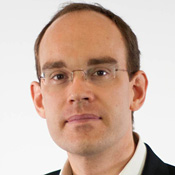